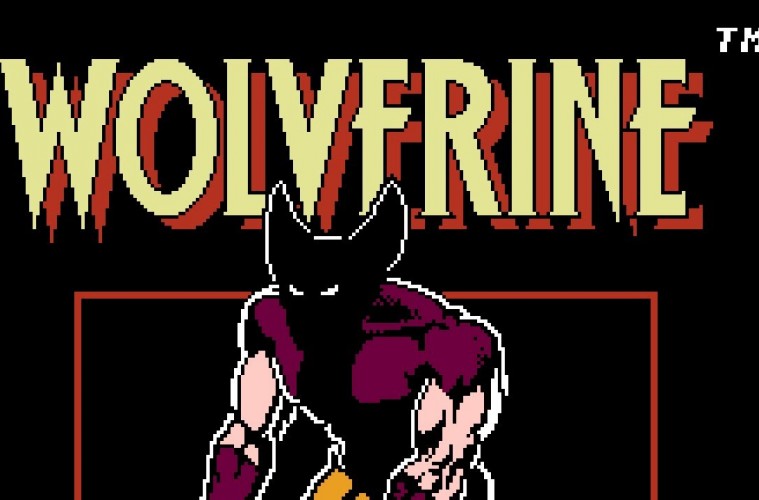 Wolverine: A History In Gaming

Of all the superheroes from both DC and Marvel, no group has had as busy a history in video games as the X-Men. Dating all the way back to the late-’80s with NES and arcade releases, the X-Men have always represented an appealing group because of their brawling nature and range of different powers and characteristics. In a way, they’re like Marvel’s ready-made Street Fighter counterpart: a diverse group of fighters practically built for arcade play.

Counting X-Men games, crossover series (like Marvel vs. Capcom), individual character games, and experiences on different systems and platforms, there have quite literally been dozens of X-Men releases in the past 25 years. But even among those, it’s often been the Wolverine titles that have made the best impressions. And with an enormous chapter in the character’s history set to come to an end in the near future, as Hugh Jackman hangs up his claws, now seems a good time to look back at the best of Wolverine gaming. 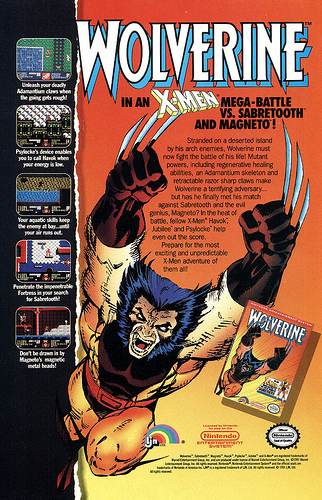 It all got started with 1991’s aptly titled Wolverine. This was a side-scrolling beat-em-up platformer developed by Software Creations and released exclusively for NES. And frankly, it wasn’t a terrific start to Wolverine’s career in video games. IGN’s own retrospective on Wolverine in gaming basically dismissed this title, noting only the bizarre fact that the best way to regain health in the game was to eat hamburgers. It was also obnoxious that the claws were basically a special attack in this game, rather than standard accessories. 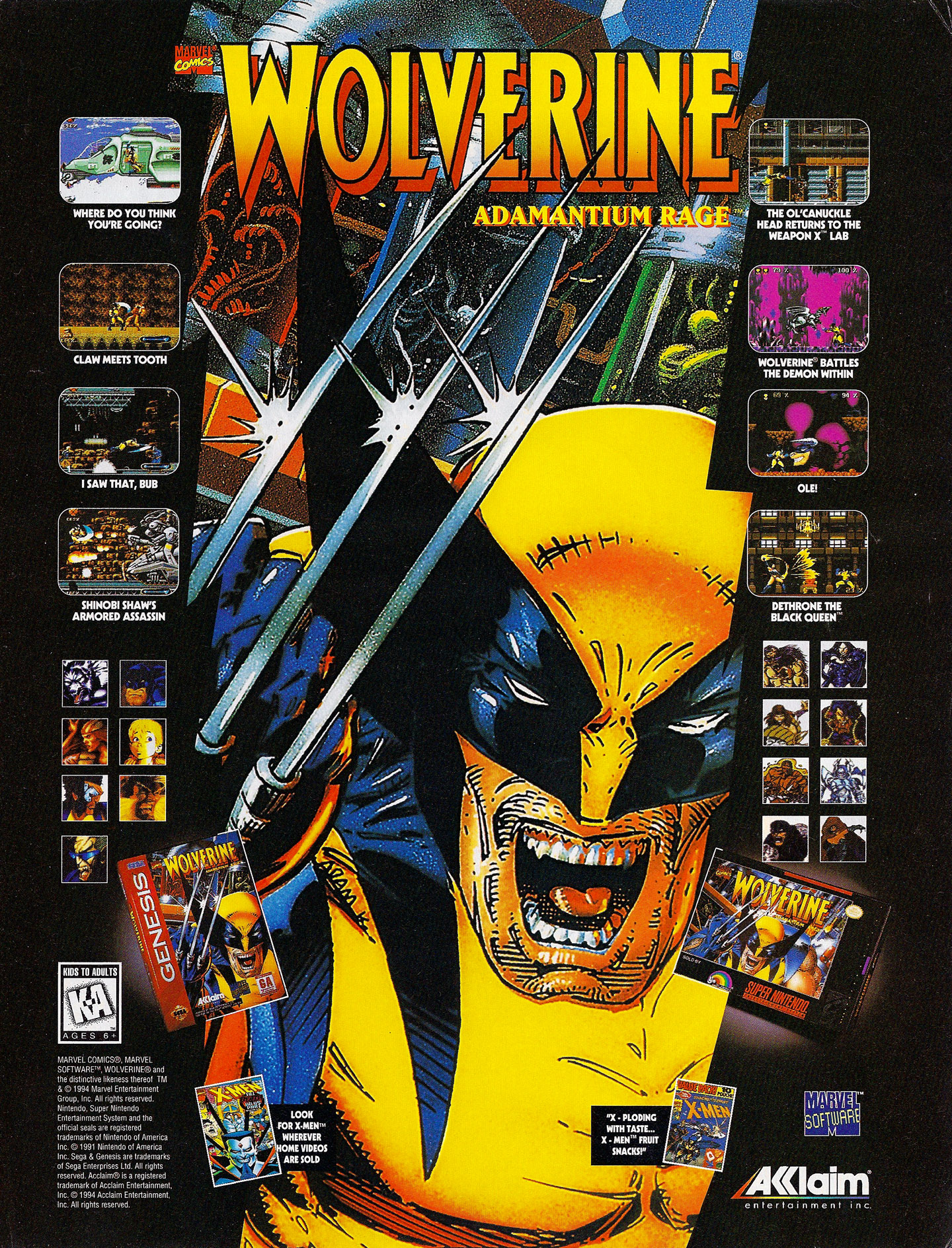 Wolverine: Adamantium Rage, which came out in ’94, was a much more satisfying effort, not unlike some previous X-Men titles in execution but something of a foundation for future Wolverine games. It was developed for both NES and the Sega Mega Drive, and the versions weren’t exactly the same. But this was another platformer that was just a little truer to the comics. More X-Men, a more plausible setting, and recharging health (as opposed to the health in Wolverine, which seemed to constantly drain) made for an engaging experience.
It was a long break before 2001 brought us X-Men: Wolverine’s Rage for Game Boy Color. While it received mixed reviews, it was one of the more accessible and amusing X-Men games at the time. The story was the most satisfying of Wolverine games to that point: a quest to stop Lady Deathstrike from making a machine that would pulverize Wolverine’s adamantium skeleton. And the gameplay was simple, though perfect for the GBC. 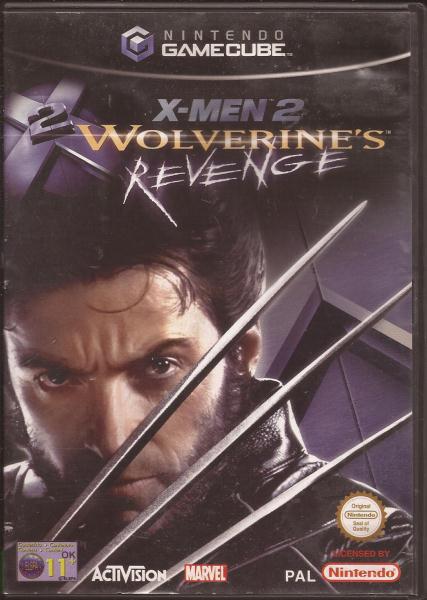 X2: Wolverine’s Revenge then became the first game for what we might think of as modern consoles, specifically the GameCube, Xbox, and Playstation 2. It was developed by GenePool Software in 2003 as a strange blend between a Marvel comics project and a release to coincide with the film X2. By far the most advanced Wolverine game at the time in terms of both graphics and length, it was a pretty satisfying experience built around Wolverine’s mission to stop the Project X mission and save himself from a deadly virus. Many may remember this game specifically for its celebrity casting as well—Patrick Stewart voiced Professor X, and Mark Hamill (you know, Luke Skywalker) took on Wolverine.

As a sort of sidestep to traditional gaming, a Wolverine-based slot machine also began making the rounds primarily in the last few years in the online gaming community. It’s not unusual to see superheroes appearing in this branch of the video game industry, though the presence of a Wolverine game separate from other X-Men titles speaks to the character’s popularity among gamers. Gala Casino describes the game as a way to “claw your way to some fierce winnings,” and classic images of the comic character are used throughout. This wasn’t a traditional arcade-style or adventure game, but rather yet another example of how well Wolverine can do alone in the industry.

And then there’s X-Men Origins: Wolverine, a 2009 release for Wii, PS2, PS3, and Xbox 360. It was designed by Activision Blizzard to accompany the film of the same name, but suffice it to say it was a vastly different experience than what hit the big screen. While the film was despised by most critics and fans alike, this game received glowing reviews for its sheer brutality and life-like depiction of a Wolverine adventure. The graphics were fairly advanced and the combat was terrific. Also, Wolverine’s healing mechanisms were widely praised as ingenious, in that you could actually see the wounds healing (as opposed to just a health bar regenerating). This game now represents the pinnacle not just of Wolverine games but X-Men gaming in general.

It’s safe to say it’s been a pretty varied and enjoyable history. And with one final Wolverine film on the way—at least, in the Hugh Jackman chapter—we can hope for another release in the coming years. An update to X-Men Origins: Wolverine for PS4 and Xbox One could easily approach the Arkham series in quality.

This article was written by David Ritch