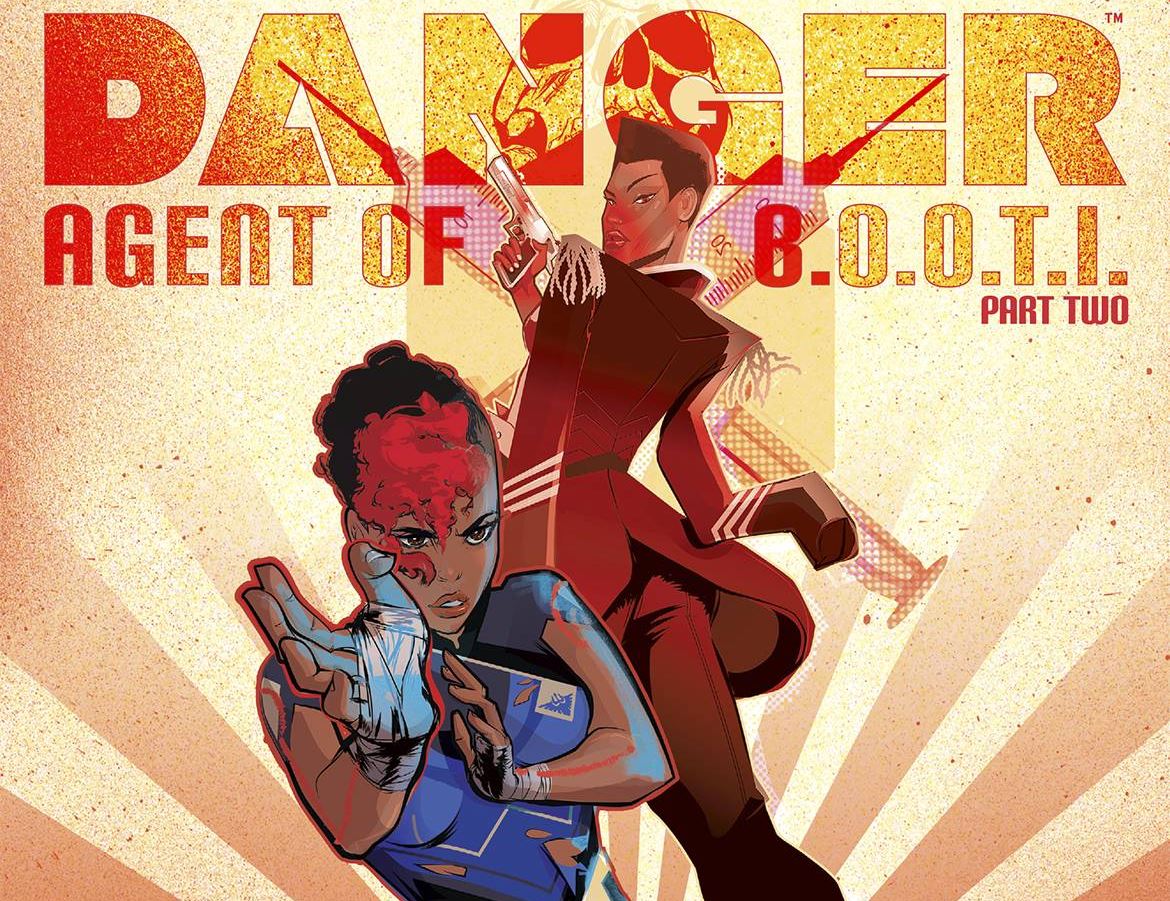 ABOUT: The first story arc in this anthology is “Lady Danger: International Agent of B.O.O.T.I.”. By day, she’s Rachelle. A young woman in her 20’s who works part-time as cashier. But her secret identity is Lady Danger, federal operative sent in when terrorists kidnap Americans. She works for B.O.O.T.I. (Bureau Of Organized Terrorism Intervention). She’s a martial artist who’s impervious to harm whose main antagonist is Fong Ah-Chan, an ex-Special Forces Chinese general with a penchant for sex slaves. She’s so well-known throughout the world as Lady Danger that people actually want to take selfies with her when they get rescued. She craves normalcy and there are two men in the story who are attracted to her (well, three if you count Ah-Chan’s perversions). After rescuing American medical workers from Ah-Chan, one of them (Dr. Derek Washington), asks her out. But during the date, he basically rufies her for the C.I.A. in exchange for lots of money and a prestigious position. The other guy is a young man named Kevin, who only knows her as Rachelle and wants to muster to courage to ask her out. 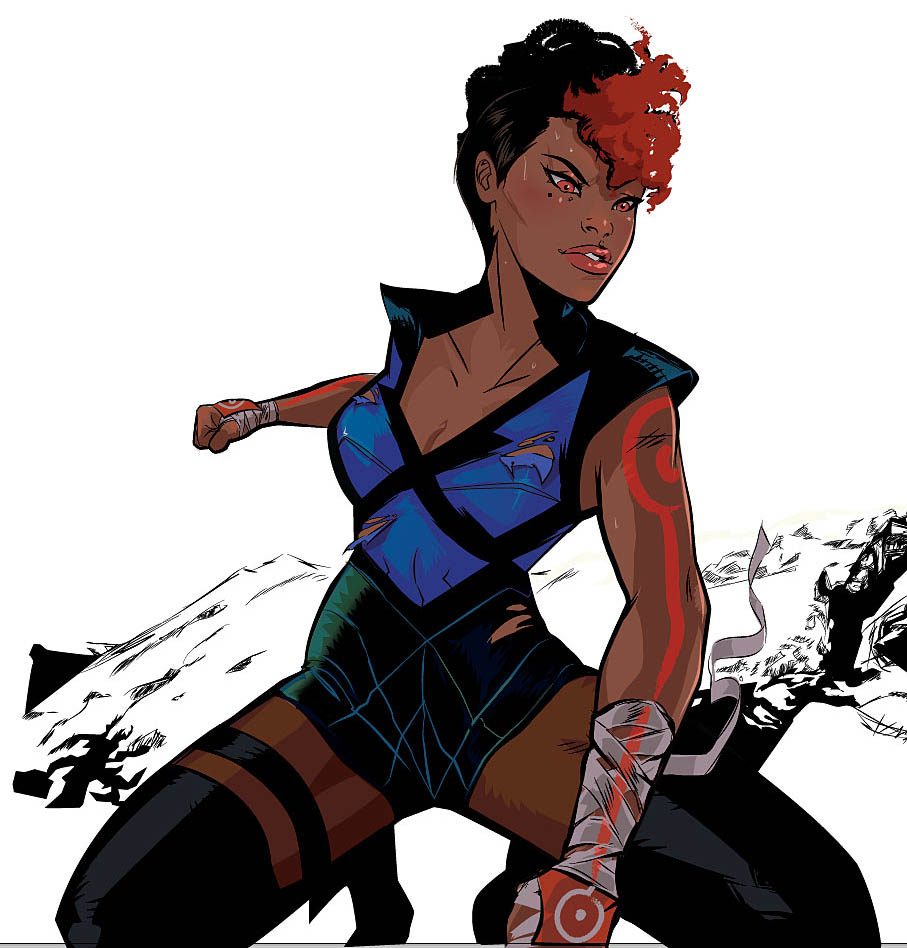 It doesn’t take long for the warring gov’t factions and a vengeance-seeking Ah-Chan to converge and fight to kill or capture Lady Danger on her own urban turf. What happens next is gore, violence, humor and some light being shed on Lady Danger’s origin.

The second story starts off with astronauts looking for life in Saturn’s oceans only to be attacked. Two of those astronauts, Britt and Veronica, get rescued by a group of asexual angels. Naked aboard a snail-like spaceship, the ladies are brought there as part of the angels’ mission to revitalize dead planets with life. They want Veronica and Britt to have lesbian sex so that they can harness and amplify the power of the female orgasm. 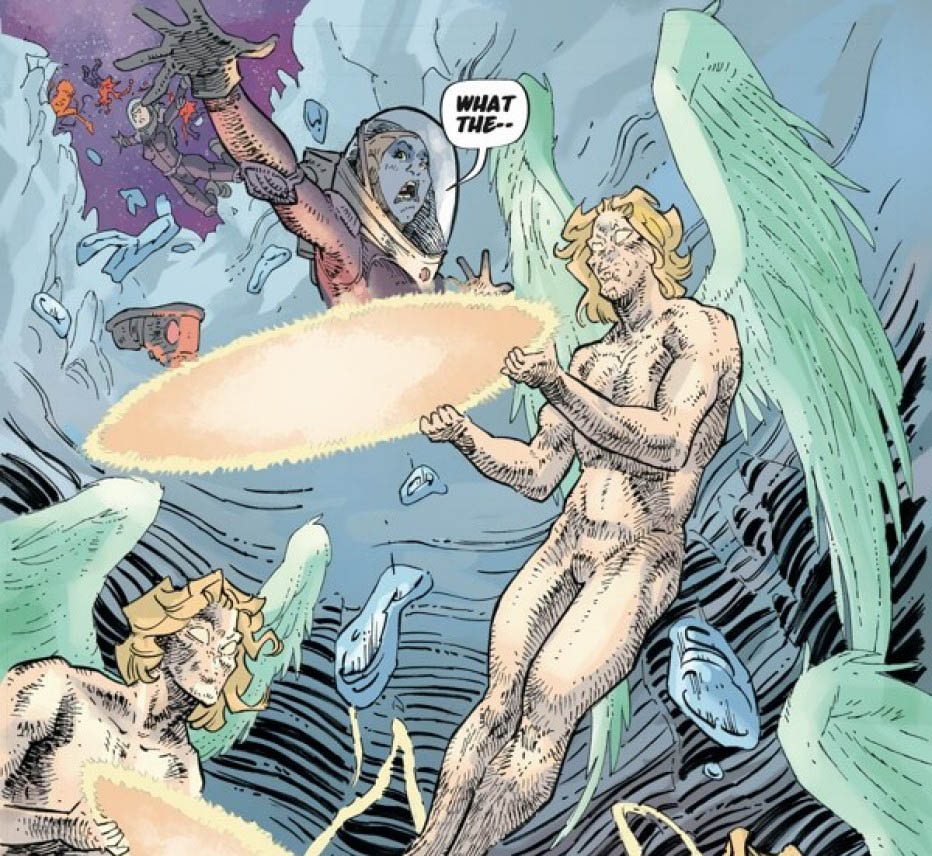 Naturally, they’re reluctant, but the alternative is even more unpleasant: To be jettisoned naked into the cold blackness of space to die. They get into each other and Veronica enjoys it more than she thought. But their orgasms are bountiful and make other females who previously had their job quite envious. Homicidally envious. What follows is a twist that serves as a commentary on many aspects of sex and gender roles.

MY TAKE: For the first story, Afua Richardson’s manga-style art work is reminiscent of Humberto Ramos. It’s cartoonish, but fitting considering the elements thrown in. Those hodgepodge of elements will certainly appeal to fans of Quentin Tarantino. Alex de Campi certainly shares Tarantino’s taste for 1970’s cinema. However, she manage to mix a Blaxploitation-style heroine with a modern-day federal espionage agency. Lady Danger sort of reminds me of Luke Cage: She’s got bulletproof skin and a throwback to that ’70s era.There was also a running sub-plot of Rachelle wanting a regular life. When not on duty, she works part-time at a convenience store. When she rescued the medical team from Ah-Chan, she practically jumped at opportunity of Dr. Washington asking her on a date. The same thing occurs with Kevin much later in the story. Not only is she on-duty a lot of the time, but she’s become famous because of it. Also look at the political satire involved. In this world, the President doesn’t send the Army to rescue Americans held hostage. He sends just one Black woman. 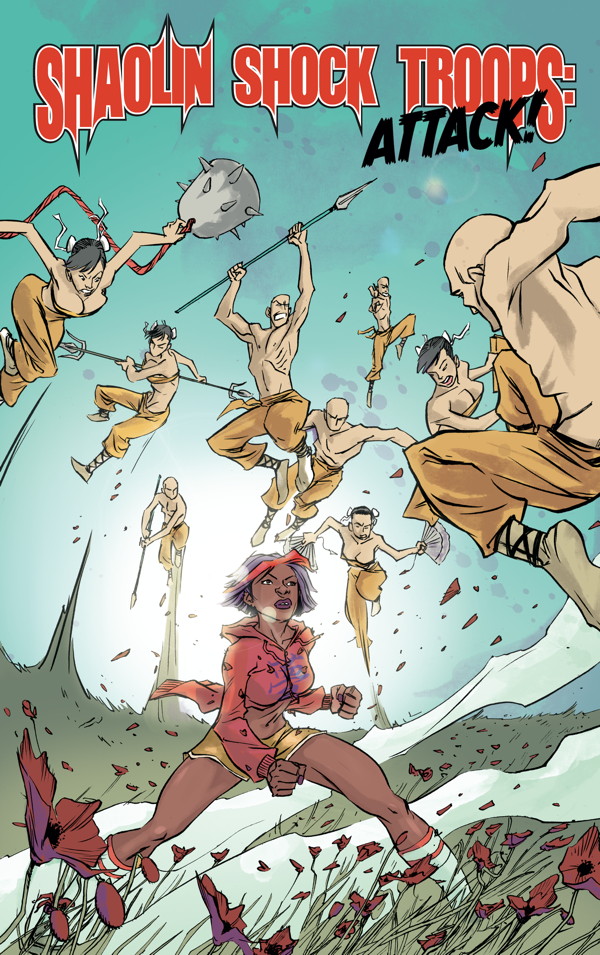 And while Rachelle is clearly a Blaxploitation product, thankfully she lacks aspects that would make her two-dimensional. She doesn’t have that neck-rollin’-sassy talk that reminds me of Foxy Brown, Christie Love “You under arrest, sugah!“) or even that Foxxy Cleopatra character from 2002’s “Austin Powers: Goldmember”). Incorporating Black-American vernacular into the story was pretty clever on De Campi’s part too: B.O.O.T.I. is a direct parody of Marvel’s S.H.I.E.L.D. with a commander being a female Nick Fury. One stand-out part for her is when she killed Dr. Washington for craving “*tsk* White approval…it’s a helluva drug“. What makes it stand-out more is that, right before he was killed, that agent was in his car driving singing the hook to “Headlines” by Drake.

There’s also a nice homage to 1979’s “The Warriors” in a panel involving various street gangs coming to the aid of Lady Danger (Beauticians, Asians, and they even have a Jewish gang called the “Orthodox Defense Force”).

The second story, also written by De Campi and drawn by Ulises Farinas, is a subtle commentary about sex in comics. Marvel’s gotten more daring over the years, with Hank Pym shrinking himself to creatively go down on Janet Van Dyne or Luke Cage and Jessica Jones having implied anal sex, but they don’t go far with it. Gore and violence, no problem. But sex? That’s still a taboo.  De Campi and Farinas turn that taboo on it’s head by being explicit as they can. They show lesbian sex between Veronica and Britt, with phallic shapes abound everywhere. But they also tackle sexual politics as well. The idea that women are basically cattle is put on full view here. These male angels kidnap women and give them a choice: Sex or death. These angels are eunuchs, which is an allegory for their emasculation, and use female orgasms to do what they (as at least partial males) should be able to do, but no longer can: Create life. While there’s plenty of sex, it’s mixed with a pretty gory….mutilating moment. 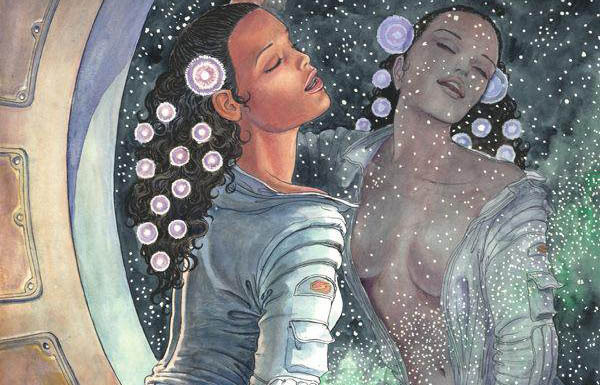 This is my first exposure to the work of Alex de Campi. She’s taken on the spy, Blaxploitation and sexploitation genres and created two fun stories. Though I thought some parts of these stories were over-the-top, perhaps that was the point. Sometimes, you just have to shout to make yourself heard.

“Grindhouse: Doors Open At Midnight Vol. 4” consists of “Grindhouse: Drive In, Bleed Out” issues #5–#8 from Dark Horse. It is available both digitally and in print on December 9, 2015.