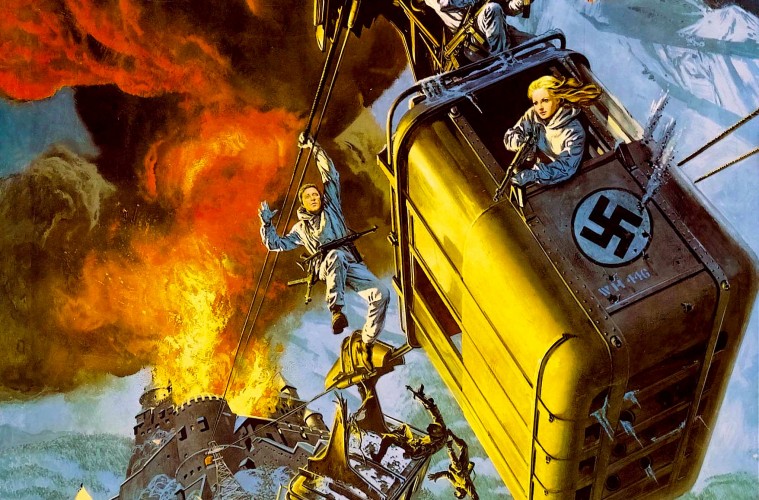 “War – what is it good for?” bellowed Edwin Starr in his most famous song.

Well, so long as you’re an action fan (and not a Motown legend) the answer is simple: gratuitous gun play, earth shuddering explosions and spectacular stunts.

So, for this classic moment in action history, we’re going back to one of the biggest and most badass war movies ever made: Where Eagles Dare (1968).

The plot sees a small team of Allied soldiers, led by Richard Burton and Clint Eastwood, infiltrate a mountaintop fortress in Nazi Germany to rescue a prisoner with information that could decide the outcome of the war.

The first half of the movie focuses on espionage thrills as our heroes sneak into the castle. But as they make their escape the film descends into a maelstrom of machinegun mayhem (with Clint Eastwood memorably mows down an entire corridor of nameless extras in one memorable scene). But this is merely prelude for Where Eagles Dare’s bravura set-piece: the cable car fight.

This sees the film’s star, Richard Burton, engage in desperate battle with two traitors from his own team atop the flimsy metal shell precariously hanging thousands of feet above the ground. There’s no slick fight choreography here. It’s just the desperate efforts of fearful men trying to stay alive.

After Burton bests his opponents, the only way to escape is to attempt a suicidal leap onto another cable car which is slowly trundling its way up the mountain. Exhausted, injured, our hero readies himself for a jump it doesn’t look like he believes he will make.

A noted Shakespearian actor, Burton was not an actor audiences associated with the performance of great physical feats. A notorious hard-drinking, hell-raiser, the former Mr Elizabeth Taylor looks every one of his 43 misspent years as tries to haul himself atop the cable car.

And it’s for all those reasons, that despite watching the film countless times, I’m still never entirely sure Burton is going to make that leap, or be able to hang-on to the cable car. That’s why it remains a classic moment in action.