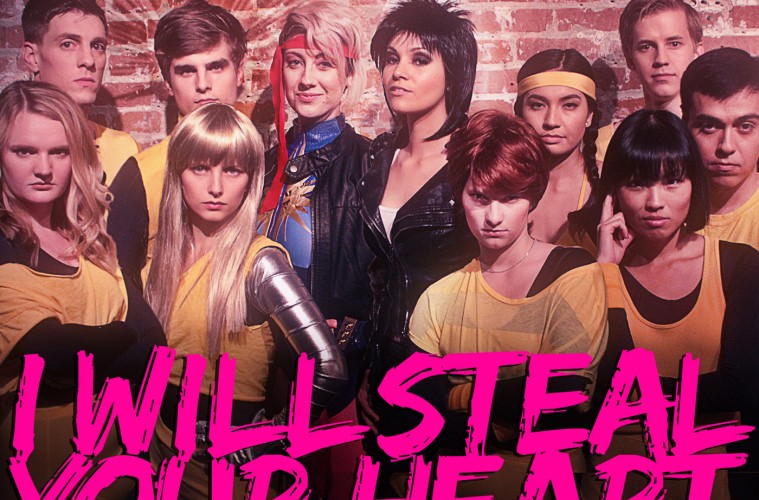 Recently, Action A Go Go put readers on to “I Will Steal Your Heart,” an inter-dimensional, pop music extravaganza from the talented folks at Greasy Pig Productions. The music video paid homage to New Mutants,  a much-loved Marvel Comic series from the 1980s that regularly zeroed in on the student body of Charles Xavier’s School For Gifted Youngsters. While the X-Men were off fighting time-traveling robots and Australian cyborgs (It was the 80s, remember?) the New Mutants were (sometimes) back at the school fighting angst, hormones, high school hierarchies, and, yes…the more than occasional supervillain.

“I Will Steal Your Heart” took us back to the wonderfully weird heyday of Marvel’s merry mutants, loosely recreating the events of New Mutants Annual #1 as the type of punk-pop music video one would’ve found on late-night MTV. At the helm of this endeavor was writer-director Arvin Bautista. As you’ll find out in the following interview, not only is Arvin a fan, but he was also painstakingly committed to pushing viewer’s nostalgia buttons.

Action A Go Go: Where does the name for your production company, Greasy Pig, come from?
Arvin Bautista: It’s that fake production company name you come up with for an elementary school video class, you know? We all had one! I just never outgrew that childish part of me (it’s only ever been a problem once with potential clients, most everyone else who’s brought it up has reacted positively).
AAGG: How long has Greasy Pig been up and running?
AB: Actually we’ve been running for about exactly a decade now! Those first few years were rough and exploratory, a lot of answer gig ads on Craigslist…
AAGG: What was the genesis of “I Will Steal Your Heart”?  Was it an original song that ended up being good for a music video or did the video concept come first?
AB: “I Will Steal Your Heart” is the sequel to a Dazzler fan video we made a year and a half ago, but the conception was generally the same: these were more obscure characters I had an affinity for, and I thought, as a filmmaker, I could bring a fresh interpretation to the X-Universe by doing a music video as though they were done BY the actual musicians. So in that way the video concept came first, and then we wrote original songs that captured the character and style we were going for.
AAGG: How long was the production on “I Will Steal Your Heart”?

AB: It was around 6 weeks of preproduction, JUST ONE DAY of shooting, and another 6 weeks of post production. Other than the Dazzler video being shot over 2 days, it was a similar timetable for both videos.
AAGG: How did you go about casting Lila, Dazzler, and the New Mutants? What were you looking for?

AB: For Lila and Dazzler we needed to lock down looks, acting ability, and singing ability. Very tough to nail all three, especially since we were working with pre-existing characters. Luckily incredible music producer Taiwo Heard managed to find us both Gentry (for Dazzler) and Sage (for Lila); they were the only two we talked to about the parts, and we gave them the job on the spot. I still don’t know how he did it. For the New Mutants we did a more traditional casting process with auditions and callbacks, and that was tough in that I needed them all to have very specific looks, ethnicities, ages, and heights. Again, we got lucky and everyone was great to work with.
AAGG: Did you grow up on X-Men as a kid?

AB: Absolutely. Comics have always been huge in the Philippines (where I was born), but in the late-80’s, early 90’s they really blew up because the X-Men reboot had some prominent Asian/Asian-American artists heading it (namely Jim Lee and Filipino Whilce Portacio). I mean I don’t think we specifically cared about them, but they brought an aesthetic that I think really tapped into our endorphine glands. When I moved to the US in 1993 all I wanted to do was visit an actual American comic book shop, and the X-Men cartoon was just coming out… it was just heaven as a kid. 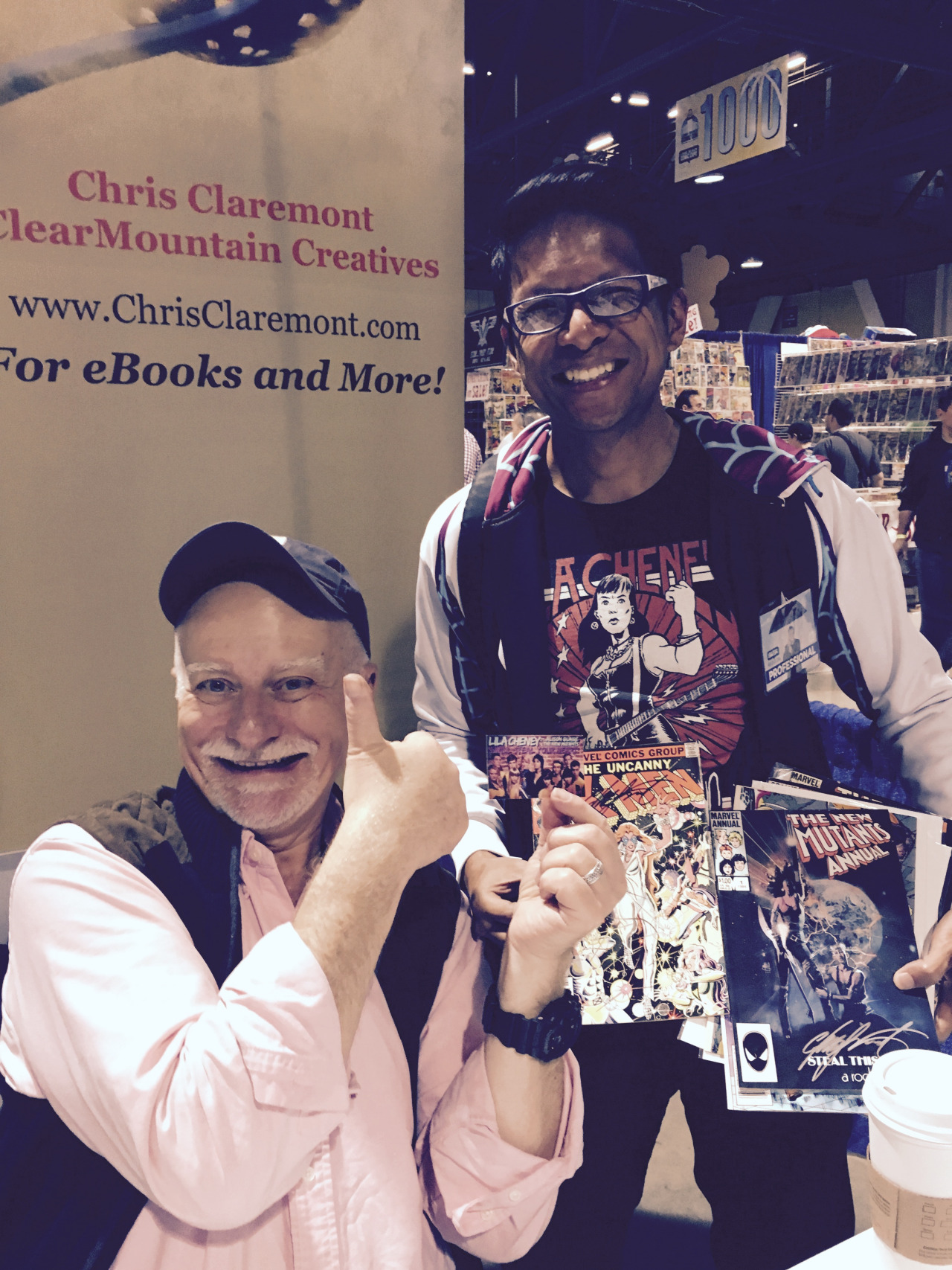 Director Arvin Bautista with legendary X-Men scribe Chris Claremont.
AAGG: Since you have an affinity for ’90s mutants, did you catch Deadpool? What you think?
AB: The thing with Deadpool is, at this point how I feel about it doesn’t matter: I made several proclamations throughout the past few years that there was no way that movie was ever going to be made… Ryan Reynolds’ career was dead, X-Men Origins: Wolverine was so hated, and the script was just too damn weird. They claim victory over me just by virtue of the movie existing as a finished product, and I am in awe of what is essentially a movie that was made entirely through pure strength of will against overwhelming odds, and now Wade can teabag my corpse with all the money the movie’s made.
AAGG: Were there any characters that you didn’t get to use that you wish you did?
AB: In hindsight I would’ve liked to include Boom Boom in the audience of the Lila Cheney video; she’s just too iconic to that era and it would’ve been fun to do a cameo. But then again I wouldn’t have had much for her to do in it, is that worse? It was hard enough to have little moments for each of the New Mutants characters to do, and if I really had my way I would’ve brought all of them into the alien world during the solo, instead of just Lila and Cannonball. Alas our schedule and budget just didn’t really allow for it.
AAGG: Have you talked to Comic Book Girl 19? She’s a huge Dazzler fan.

AB: Tons of people have sent her our video, and I’m pretty sure I tweeted to her when we released the original Dazzler video, but I haven’t heard a reaction from her one way or the other. I was just generally happily shocked at how many huge Dazzler fans were out there.
AAGG: What’s next for you and your production company?
AB: We’re doing more short-form internet video content, music videos, etc. We are releasing a VFX breakdown of the effects from “I Will Steal Your Heart” next week. No specific plans in the works for a sequel to “I Will Steal Your Heart,” in the same way that Marvel’s Jeph Loeb just said right now there wasn’t a specific plan for a Punisher spin-off TV series. I would love to, but I need to get the proper inspiration.
AAGG: The X-Men are a pop culture mainstay that has influenced so many people. In your opinion, what makes them so special?

AB: I’ve come to realize that my fandom is extremely personal to me, and even I have trouble putting into words what I like about it (honestly as a kid I probably just bought into the aesthetics of it all). I mean, I made the Dazzler video assuming nobody actually liked Dazzler except for me, and I was dead wrong about that. Then I made the Lila Cheney video assuming nobody even KNEW who Lila Cheney was, much less had an opinion of her, and I was wrong again there. I just make these videos for myself because they make me happy, and I’m lucky that others feel the same way. That’s good enough for me.
AAGG: Where can we find more of your stuff?AB: Superheropop.com is where we have all the Dazzler and Lila Cheney stuff (and anything else that may come up), but our main page is greasypigstudios.com . We’re overdue for the standard once-yearly brand refresh, but I do keep the site updated with all our work.
ACTION A GO GO would like to thank Arvin Bautista for taking the time to interview with us. You can check out more of his amazing work at the links provided above. And if you can’t get “I Will Steal Your Heart” out of your head (we sure can’t) then you can buy the song at SuperheroPop’s official online store.