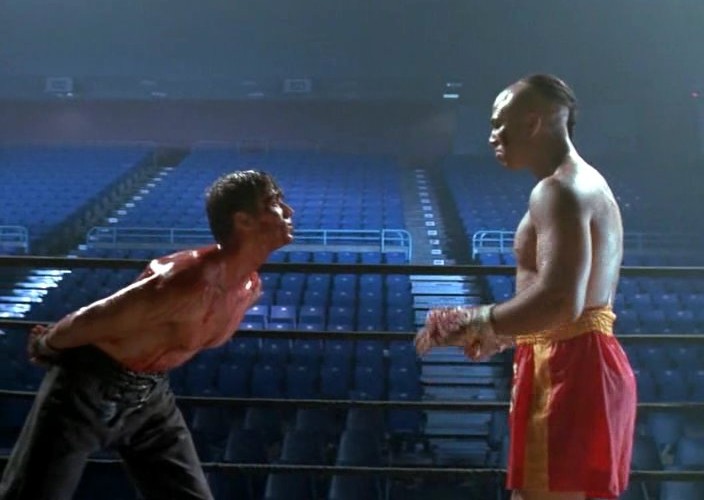 Netflixing Under the Influence: “Kickboxer 2” Replaces JCVD with a Surfer Dude

One fateful day, Kickboxer 2: The Road Back, Kickboxer 3: The Art of War, and Kickboxer 4: The Aggressor were all imminently expiring from Netflix’s streaming service.  Me being the idiot that I am… I watched all of them in one sitting.  All three are uniquely terrible in their own ways, so they will all get write-ups… some day.  For now, let’s just take them one at a time.

The original film with Jean Claude Van Damme is a perfectly fine movie.  After really hitting the scene with his Bruce Lee pastiche in Bloodsport, JCVD was able to break out and show a little of his own natural charm and flexibility as a fighter (and a dancer) the following year with the similarly plotted Kickboxer.

It only makes sense that the sequel would be worth watching, even if directed by schlockmeister Albert Pyun.

As mentioned, this was the first of three Kickboxer films in a row, so I knew I’d be kickboxing my day away.  None of my friends like me that much, so I was all alone and sampling Not Your Father’s Root Beer which is a spiced ale that tastes remarkably like the soft drink.  It’s much too sweet for my tastes, but definitely potable.  After a couple bottles, however, I needed the more grounded taste of a normal Sam Adams to keep the sugary root beer flavor from becoming too overwhelming.

In case you missed it, the first film is about a kickboxing enthusiast named Kurt Sloane avenging his brother Eric after a cheating hulk of a man named Tong Po (Michael Qissi) cripples him in a cheap move during a fight.  Even after the wheelchair-bound Eric is eventually kidnapped by Po, Kurt is able to defeat him while the trainer of the two brothers (Xian Chow played by Dennis Chan) rescues Eric.

So expect to be disappointed when Kickboxer 2: The Road Back begins and we learn that there was an unmentioned third brother named David who will be the focal point of this story.  To believably shift the attention to this new sibing,   David S. Goyer’s script (Blade II, The Dark Knight) starts off on an egregiously wrong foot that would be hard to recover from even if Kickboxer 2 was a masterpiece.  In the first few minutes, the audience learns that both Kurt and Eric were killed offscreen right after the first movie ended.

In addition to being depressingly unceremonious in the way these sudden murders changes the events of the original movie, it’s just plain lazy.  Obviously JCVD’s star was on the rise and wasn’t about to attach himself to an uninspired sequel, but it’s so much less cumbersome if the filmmakers had realized that nobody is watching this series for the character continuity and simply recast Van Damme or admitted it was a sequel in name only.  When Qissic’s Po and Chan’s Chow enter the story, it feels like Albert Pyun is crawling uphill to try and establish connections within the franchise. 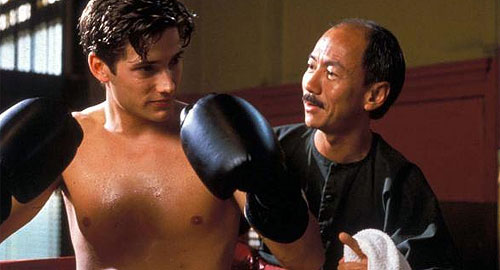 Sasha Mitchell plays David Sloane as the agonizingly virtuous owner of a Los Angeles kickboxing gym who takes in troubled youths and teaches life lessons along the way.  Because of his hesitance to sell out, he is having trouble making enough money to keep the gym doors open (or whatever, it’s never made clear why he’s struggling).  As a result, he is eventually enticed by a businessman played by Peter Boyle to fight in a corrupt, semi-pro kickboxing league.

Sloane starts winning, which earns him enough prize money to save the gym, but also earns him the attention of a familiar enemy.  Killing Kurt and Eric apparently wasn’t enough to sate Tong Po’s bloodlust when he lost the match in the previous movie.  To save face, he now has to beat the third brother as well, even though I’m pretty sure that’s not how championships work. 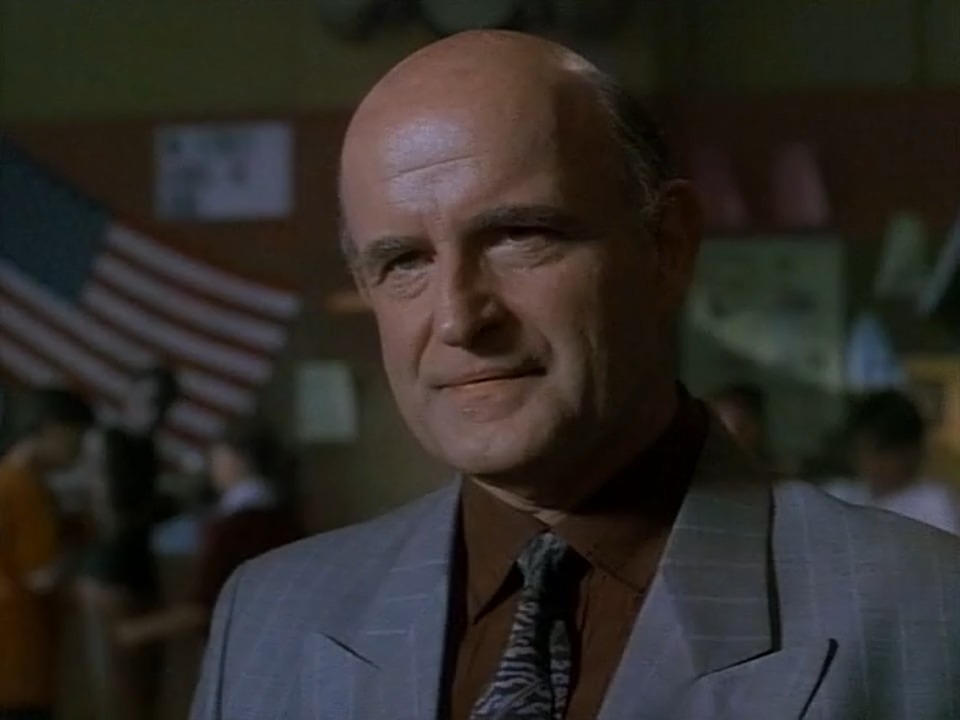 When the gym is eventually burnt down by Peter Boyle’s forces and Po kills a fighter in the ring to taunt Sloane, he’s forced to come out of retirement and get vengeance.  Of course, this means the movie is hitting a lot of the beats of its predecessor, so to up the stakes the two fighters dip their gloves in broken glass and the blood starts to fly.

Speaking of the final match, it’s far and away the best sequence of the film.  Sure… in a better film, it may not stand out at all.  However, the choreography here has a sense of realism to it while the camera stays mostly within clear close-ups and liberal use of slow motion.  A lot of the filmmaking decisions make the fight seem more brutal than the actual martial art elements would communicate.  As blood gushes out of the fighters’ bodies and stains the mat, for example, Pyun utilizes a deafeningly visceral sound effect of the incessant dripping on the ground. 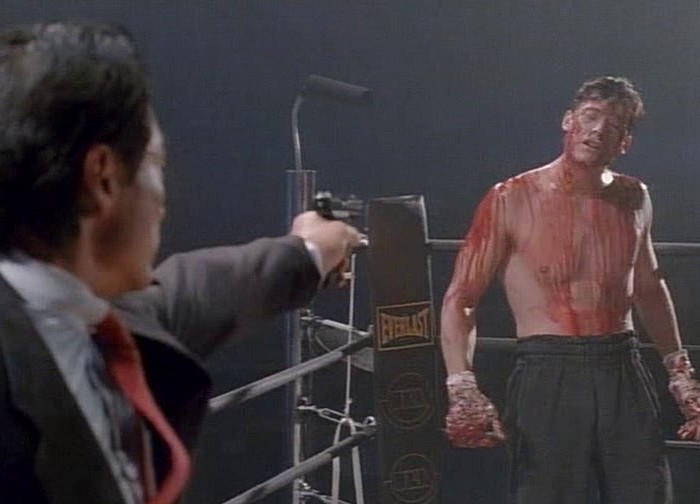 As predictable as the story feels, Sloane’s pursuit of vengeance still manages to feed into the climax in an effective way that heightens the thrills of this final fight.  When our blood-streaked hero gets his second wind and eventually defeats Tong Po, it’s less corny than it should be.  The always welcome Cary-Hiroyuki Tagawa gets a lot of screentime during this sequence as well as Po’s evil manager, which is nice.

There were only three things I knew about Sasha Mitchell coming into this one:

No matter the specifics of his case, whenever someone who’s mostly become famous for punching and kicking gets in trouble for spousal abuse, it leaves an especially bad taste in one’s mouth when watching them do all the aforementioned kicking and punching. 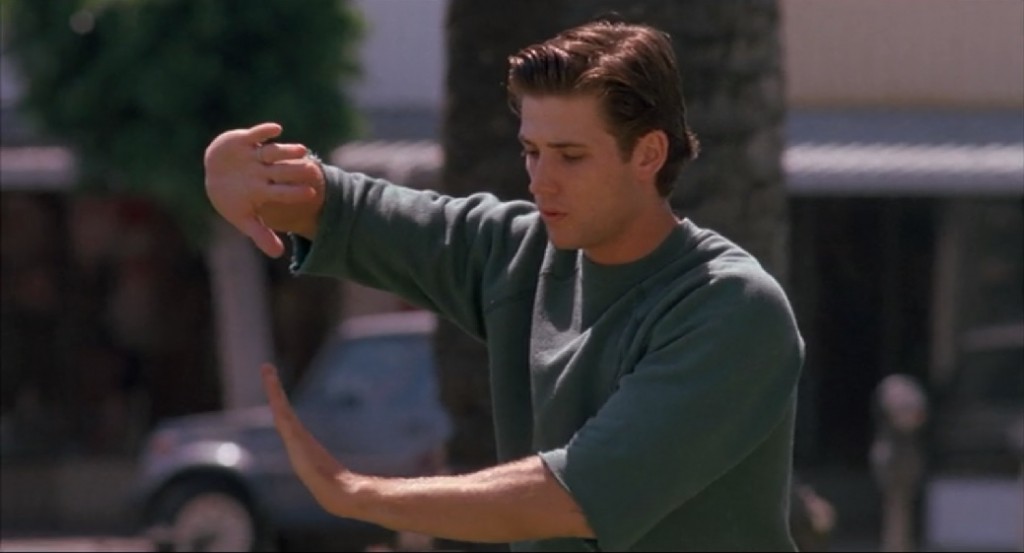 But that’s not even the reason he is the worst part of the film.  I just cannot figure out for the life of me who would ever cast Cody from “Step By Step” in an action film.  Sure, nobody knew him by that name when the movie was made (Kickboxer 2: The Road Back was released two months before the first airing of ‘Step By Step’), but there had to be some inclination that a doofus with unavoidable surfer affectations wasn’t the best choice for the stoic kickboxing brother of Jean Claude Van Damme.  It’s one of the weakest central performances I’ve ever seen on-screen as he earnestly delivers his lines with the vigor of that really chill drug dealer who just wants to hang out for a little bit, man.  Unfortunately, the story demands should probably be hinged on someone with slightly more charisma than a sopping wet pile of bedsheets.

Yeah, I convinced myself.  This is a bad movie.  Don’t watch it.