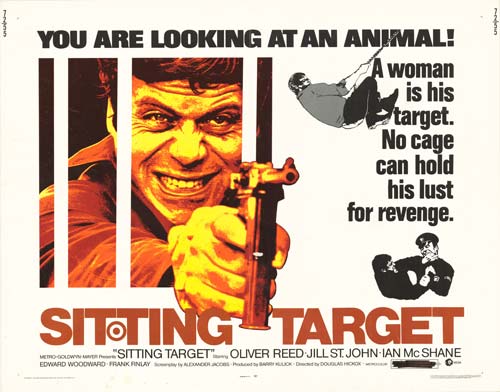 In the early 1970s a slew of gritty, violent crime thrillers muscled their way onto cinema screens. Movies like The French Connection, Get Carter, Shaft and Dirty Harry.

But while those titles are still touchstones for filmmakers today, Sitting Target (1972) is all but forgotten. Which is a shame as this tough, uncompromising crime flick can punch its weight amongst its more illustrious company.

The plot is dark and hardboiled (little wonder given it’s written by Alexander Jacobs who scripted Point Blank and The French Connection II). Criminal hard-case Harry Lomart (Oliver Reed) breaks out of prison with the sole purpose of murdering his wife who’s become pregnant by another man (not that this really explains or justifies his psychopathic behaviour). We then watch as Lomart tries to complete his mission before he can be recaptured by the police.

Despite playing an utterly unsympathetic character, Reed makes Lomart completely compelling. In the film’s opening shots we see Reed methodically working out in his cell. The tension is palpable. He looks like a coiled spring.

Quiet, controlled, Reed exudes a brooding intensity which makes his sudden outbursts of violence all the more brutal. During his prison break he fights a guard dog. It’s hard to tell which the most savage animal is. 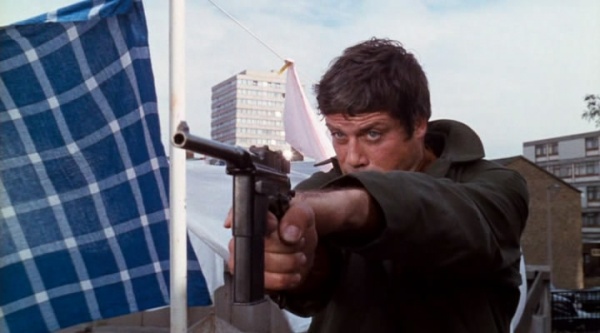 The director Douglas Hickox (whose eclectic CV includes creature features, pop musicals, and campy horror) use of authentically seedy locations is reminiscent of the cinema verite-style of The French Connection. The near silent jail break sequence is wonderfully tense (no doubt helped by the contribution of editor John Glen who cut many Bond films, before directing several himself).

All these qualities make this movie ripe for rediscovery. So if you want to watch a hard-hitting crime flick, then take aim at Sitting Target.

Check out the trailer.

Watch a preview clip as Lomart tries to evade the police.