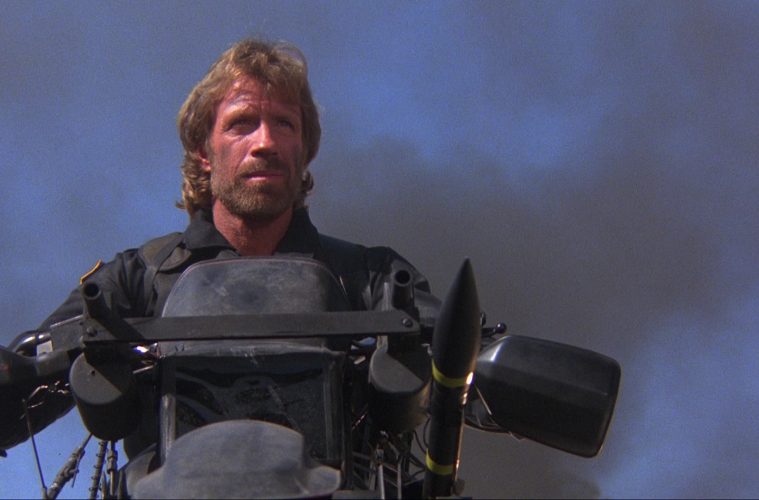 Celebrating 30 Years Of Chuck Norris In ‘The Delta Force’!

The love of a movie when we’re kids is unmatched by anything else. Even before we begin to realize the majesty of a beautiful woman, it’s the magic of movies that enthrall us. We all have fond memories of sitting down to a movie for the first time and being blown away by it all. Whether it’s the first time we saw John McClane blow up an aeroplane full of terrorists in ‘Die Hard 2’, or saw Schwarzenegger destroy a bunch of police cars with a stampede gun in ‘Terminator 2’, we all have those great moments in time when we were overjoyed just to be watching a hero onscreen battle the villains. It always has a profound effect on our future lives. Even my great love of fire trucks was born from seeing the incomparable Roger Moore as James Bond in ‘A View To A Kill’ swing from the ladder of a wonderful fire engine as it hurtled through San Francisco. Movies are the fondest memories we have as kids. And one of the very finest I’ve ever had was first seeing Chuck Norris beat a brutal terrorist half to death and then blow him up by way of a motorcycle missile. That first memory has stayed with me to this day, as has the entire classic, ‘The Delta Force’, from 1986.

Chuck Norris stars as Captain McCoy, a member of the U.S. Delta Force, who quits his post after an attempted rescue goes horribly wrong. But when a commercial plane, flying from Egypt to New York City, is hijacked and it’s passengers taken hostage, McCoy heads straight back into action to rescue the many innocent people from the now diverted flight. As the terrorists begin to divide the passengers and remove many of them from the plane to be held hostage on the ground, McCoy and his Delta Force team take on their deadliest mission, to save as many lives as they can, and stop the terrorists from bringing America to its knees.

‘The Delta Force’ is definitive Chuck Norris. Any lover of action cinema knows the legend of this great man, and I join the ranks as a big fan. But it’s this monster action masterpiece that made me the fan I am today. Chuck has made many a great movie, but never anything on the scale of this now 30 year-old classic. The action, the stunts and the story are still the biggest, baddest and most epic of any Chuck Norris movie ever made. And the man himself kicks more ass and destroys more terrorist scum than he ever had before. Filled with the most jaw-dropping action sequences of the 1980’s, ‘The Delta Force’ even saw fit to give Chuck his very own missile motorcycle, which he uses to obliterate as many evil-doers as possible. The sight of such an iconc, as he speeds his way along a runway taking out terrorists with rockets and bullets, is nothing short of glorious. And as we know, this is also one of the world’s greatest martial artists, and he uses those deadly skills to wonderful use, mixing dazzling kicks and punches with spectacular gunplay and his legendary one-liners. Chuck Norris just simply has never been more wonderful than he is in this movie. That cable slide is still the coolest I’ve ever seen it done, and is now frequently near-copied by action legends such as John Woo for many of his movies.

The story itself is perhaps best known as three real-life terrorist attacks, including the horrific hijacking of a passenger flight in 1985, which serves as the basis for ‘The Delta Force’ movie. Using inspiration from the real-life rescue missions, there is some very emotional and powerful filmmaking here. Especially the studio’s inclusion of a scene where a navy solider is brutally beaten, murdered and thrown from the plane, which happened during the real 1985 hijacking. And when not utilizing real-life tragic events, the writers also the dramatic scenes of Jewish hostages being targeted by the terrorists to be removed from the plane, with them forcing a German stewardess to identify the many Jewish people on the flight, against her will. With many of the Jewish people being holocost survivors, this storyline adds a level of emotion never seen in a movie of this style, especially at its time. The acting of these scenes, from the many legendary and brilliant actors in the movie, is nothing short of perfect. The gutwrenching emotion is what makes the whole movie so much more important than just another great kick-ass Chuck Norris flick. The world is filled with monsters, and very few action movies ever dared to be so brave in showing them as this. In a world filled with ISIS and the horrible memories of 9/11, it’s something truly special to visit a movie like ‘The Delta Force’ and see these people have their evil asses handed to them by the good guys of the world.

The cast, including Chuck of course, are all of top quality, featuring disaster movie legends such as Shelly Winters and George Kennedy, alongside Robert Forster, Martin Balsam, Joey Bishop and Robert Vaughn. But right up there alongside Chuck Norris is the iconic Lee Marvin, in his last movie role before his sad death. To see another beloved action star share the bill with Norris is something to behold. Two great titans of action cinema thrown together in a deadly battle against terrorism is yet another reason ‘The Delta Force’ is just so damn beautiful. And for a final role, I don’t think Lee Marvin could have hoped for a better movie to end his fantastic career with.

Sadly, we lost the brilliant director Menahem Golan two years ago. Not only director and producer on ‘The Delta Force’, he is responsible for other action movie greats such as many of the ‘Death Wish’ sequels, the classic ‘Runaway Train’ and even more movies starring Chuck Norris such as ‘Invasion U.S.A.’ and most importantly, the absolutely awesome sequel to ‘The Delta Force’, ‘Delta Force 2: Operation Stranglehold’ (aka ‘Delta Force 2: The Colombian Connection’). With all those movies under his Cannon Group production company, Golan, alongside his movie partner Yoram Globus gave us so many wonderful B-movie action greats, even producing the horrendous but lovable ‘Superman IV: The Quest For Peace’ with Christopher Reeve. And it’s ‘Delta Force 2’ that shines above anything after the original movie, as a kick-ass Chuck Norris badass action thriller. While very different and nowhere near the scale of the first movie, ‘Delta Force 2’ is everything a classic 1990’s action movie should be, filled with spectacular stunts, plenty of hardcore gunfights, Chuck’s martial arts genius and an awesome villain, played by the fantastic Billy Drago. A really top-notch fun thriller for action fans.

Aside from the much-mentioned skills of Chuck, the legendary cast, the death-defying action and the heartfelt emotion on offer, there’s a huge amount of credit to go to one man… Alan Silvestri. Responsible for some of the greatest movie scores ever written, such as the ‘Back To The Future’ trilogy (The first movie coming in 1985, a year before ‘The Delta Force’, ‘Forrest Gump’, ‘Predator’, ‘The Polar Express’, ‘Disney’s A Christmas Carol’ and many of the recent Marvel Avengers movies, including ‘Marvel’s The Avengers’ and the spectacular ‘Captain America: The Winter Soldier’, Silvestri is pure Hollywood music magic. And it’s his score here for ‘The Delta Force’ that remains for me the greatest thing he’s ever done. When you hear that main theme tune kick in and you catch a glimpse of Chuck Norris rescuing a fellow soldier, it’s just impossible to describe the total joy and excitement I get from that. And as the action smashes on, the theme tune just gets more glorious, eventually coming to an almost Christmas tune for the epic van chase that remains my highlight of the movie. Silvestri’s music is just wonderful, and it’s impossible to imagine the movie without it. Even for the many emotional punches delivered, Silvestri provides a heartbreaking and simplistic theme that draws a tear from the eye. The whole score just elevates the movie to ubeatable heights. Which is why it has been so beloved and popular over the years, especially online through YouTube.

It’s hard to believe it’s been 30 years since ‘The Delta Force’ came to be. I still remember sitting on the floor in front of the TV, watching it on video shortly after it came out in rental stores, clutching my toy dog and a packet of sweets, just thinking that life seriously doesn’t get any better than that. And to this day, Chuck Norris on that bike, dishing out rocket-powered death to a hoard of evil terrorist scum, remains one of the greatest things I will ever see. I know it’s just a movie to a lot of people, it’s even horribly underrated by many, but by me it will always be the greatest movie of the 1980’s and a treasure I’ll always hold high on a pedestal, in my movie-loving life. Thank God for Chuck Norris. Or should that be thank Chuck Norris for God?