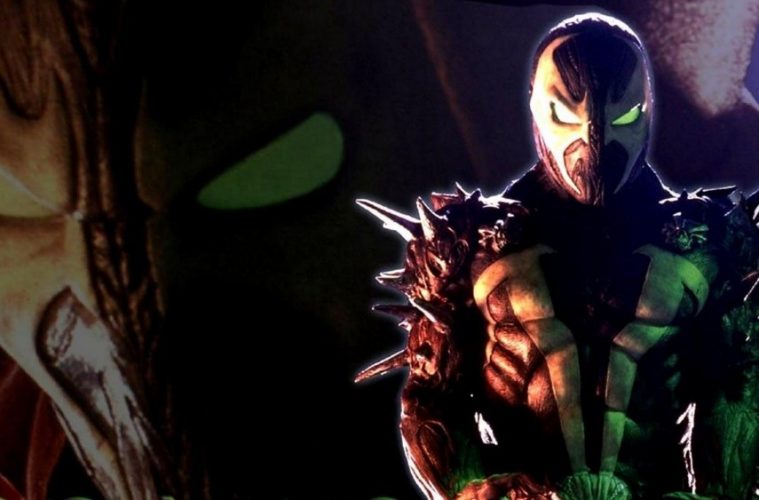 Looking back at the greatest action movies of 1997 for the past few months has been a lot of fun. Rarely has a year held so much magic in cinema as 1997. As a major fan of action movies, that year meant a lot to me. I remember it all so clearly, as Hollywood gave birth to so many incredible movies in the genre. Sadly, it was also a year of great divide, where many movies were cast aside, due to so much dislike. Even a movie like ‘Speed 2: Cruise Control’ couldn’t survive the blast of hate. And while I’ve often been mistreated for my love of that movie, I continue to be a big fan. That’s the power of movies. Some will love them, some will not. That’s the fun of it all. And among those movies to hit the screens in 1997 was yet another critically hated blockbuster, the horribly underrated and action-packed spectacular… ‘Spawn’.

Thinking of divisive movies always makes me wonder what other people are thinking. I see one thing, but yet they see something else. Or at least they claim to. ‘Spawn’ is a perfect example of that. Based on the classic comic book series created by Todd McFarlane, ‘Spawn’ stars the incredible martial arts action star Michael Jai White as Al Simmons, a black ops agent who is betrayed by his employer, Jason Wynn (Martin Sheen) and brutally murdered. Banished to hell for his crimes on earth, Simmons longs to see his family one more time. In his desperation, he strikes a deal with Satan to lead Hell’s army into Armageddon. But when he discovers that the man who had him killed has now created a biological weapon that could kill everyone in the world, he uses the power and armor given to him by his new ruler to hunt his killer and protect his family from impending doom. With enemies all around, including his terrifying assistant Violator (Brilliantly played by John Leguizamo), the new Hellspawn is about to unleash his brutal fiery rage on those who threaten the only good remains of his life, his wife and child.

When it comes to comic book movies, my knowledge of their basis has always been extremely low. Heroes such as Batman, Superman and Incredible Hulk have always led my life. But my understanding of their original source is very poor. I’ve always come to these characters from the countless movies and TV shows they star in. I’ve no memory of ever reading a full Batman comic, for example. And yet my love of Batman and all of these heroes is almost incomparable. The very same idea extends to Spawn. My first viewing of the movie came as a fresh new adventure to me. I’d never read the comics, I knew very little of the character. ‘Spawn’ was my first experience of Al Simmons and the world of Spawn. So coming to something like this without prior knowledge gave me an advantage. I could view the movie without expecting anything other than a great movie. No facts are known to me, no history of the character or various villains, even my knowledge of Todd McFarlane is pretty slim. I’ve never even seen the other animated movies based on these comics. All I know of Spawn is this 1997 movie. And I LOVE it! Without hesitation! While I understand a lot of fans were not happy, I was never a fan. So seeing the movie and knowing only the movie perhaps gave me an edge. You may dislike it because it’s not what you wanted from the source. But to me, the movie IS my source, and that’s how I’ve always rated it.

‘Spawn’ is absolutely powerful. Although action-packed to the extreme, absolutely hilarious and beautifully evil to look at, it’s the power that gets me. The insane CGI, the deep growling tone of Michael Jai White, and the level of the action scenes slay me every time I watch it. And if the Hellish visuals and spectacular action scenes weren’t enough, throwing in a pounding rock soundtrack just pushes the movie past the limits of most things I had seen at that time. Powerful is the one word that describes ‘Spawn’ perfectly. While (lovingly) cheesy, and some sections of the CGI coming across a little rushed and budgeted, the raw excitement of this movie surely could never be denied. The action scenes are sensational. The shootout at the party is glorious. To this day, I still can’t get that image of Spawn flipping off a balcony in slow-motion with guns blasting down killers out of my mind. It’s pure magic. And the motorbike/truck chase between Spawn and Violator is a total joy to watch. Sure, the special effects aren’t up to the standard of a Steven Spielberg or James Cameron movie, but there’s only so much one can do with a budget of $40 million when faced with a project like this. For that money, I feel they did a great job. The Hell scenes suffer a little at times, but again, hardly the fault of the filmmakers. And the makeup for both Spawn and Violator is terrific. For a 90-minute action movie, ‘Spawn’ puts on a hell of a display. And Michael Jai White is a wonderful action star. He is displayed brillaintly here, getting to use that awesome voice and kick-ass skills throughout the movie. And John Leguizamo is perfect as the disgusting, evil and hilarious Violator. Fans of the comic have problems with him, but as I’ve never read the comics, I think he’s absolutely awesome.

‘Spawn’ stands for more than people give it credit for. It unleashed Michael Jai White into the action world for his first major role on the big screen. It was directed by Industrial Light & Magic genius Mark A.Z. Dippe, who worked on the movies that created modern special effects, ‘Jurassic Park’ and ‘Terminator 2: Judgment Day’ (Did you spot the earlier reference?). And it was also the first comic book movie to have a black actor in the leading role. Although some changes were made for racial reasons (Some original black characters were played by white actors to attract a larger white audience), it was great to finally see a black comic book character on screen. For whatever problems it may have in comparison with its source material, I have nothing but love and excitement for ‘Spawn’, all these 20 years later. I’m a movie fan, not a comic book fan. And for that reason, ‘Spawn’ will always get nothing but the highest praise from me.