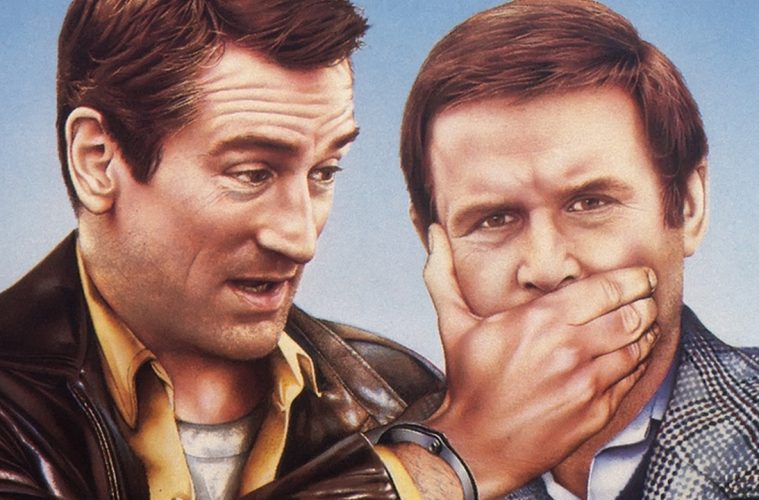 Robert De Niro is one of the finest and most respected actors in movies. Known for his tough-guy roles in mafia classics such as ‘Once Upon A Time In America’, ‘The Godfather Part II’, ‘Casino’, ‘The Untouchables’ and ‘Goodfellas’, De Niro has been lighting up our screens for decades. And his performances have always rightly garnered him a lot of great praise, with iconic turns outside of mafia roles in movies such as ‘Raging Bull’, ‘The Deer Hunter’, ‘The Mission’ and ‘Taxi Driver’. He even stars in the spectacular action thriller ‘Ronin’, which is held on a pedestal by action movie fans around the world. There is no denying that Robert De Niro is a true legend, responsible for some of the silver screen’s greatest moments. “You talkin’ to me?’. But despite all of those classics, there is always one movie in his career that stands above all else for me… The wonderful 1988 action comedy ‘Midnight Run’.

De Niro stars as Jack Walsh, a tough bounty hunter, who is estranged from his wife and daughter, and always on the lookout for a big pay day. But he gets more than he bargained for when he agrees to track down a mob accountant who stole $15 million from his employers. Known as ‘The Duke’ (Played by the wonderful Charles Grodin), Walsh must find and deliver the embezzler in five days to a bailbondsman (The brilliant Joe Pantoliano), to collect a bounty of $100,000. What Walsh doesn’t count on is the fast-talking and quick-witted Duke has every escape trick up his sleeve, and he’s about to make life a living hell on the road trip that neither one will ever forget.

Robert De Niro is an expert at mixing a level of comedy through even his darkest roles, but seeing him in full comedic and action man swing in ‘Midnight Run’ is something so much more special to me than his other works. The arguments between Walsh and Duke are nothing short of spectacular. Brilliantly written, packed with fantastic threats and insults, and an intelligence that most modern action comedies can’t muster up, ‘Midnight Run’ for its script and character work alone is a masterpiece. But not only do we get all of those classic exchanges such as “I can’t fly… I suffer from aviaphobia – What does that mean? – It means I can’t fly. I also suffer from acrophobia and claustrophobia. – I’ll tell you what… if you don’t cooperate, you’re gonna suffer from fistophobia!.”, but the action content is also fantastic. While not the most action packed buddy comedy, when it is time for action, it’s handled brilliantly by ‘Beverly Hills Cop’ director Martin Brest. The off-road chase as Walsh and Duke flee from the FBI is absolutely awesome. And the terrific chopper chase is hysterical. And there’s plenty of guns and foot chases to keep the thrills going high. ‘Midnight Run’ might be more about the perfect comedy and script, but the action scenes make it even more enjoyable.

‘Midnight Run’ is like a game of chess. It needs many pieces to make it a real game. And it has that in excess. De Niro obviously is at his very best (I’ve never loved him more in a movie), but Charles Grodin as the Duke is a total treasure. Known for his family-friendly movies such as ‘Beethoven’ and the Steve Martin classic ‘The Lonely Guy’, Grodin is perfect alongside De Niro, dishing out line after line of pure comedy gold, as he constantly tries to escape from his captor and get to freedom. And as the movie smashes along, seeing the two become unlikely friends is beautiful. As a fond respect begins to grow between them, there’s a sweetness in both De Niro and Grodin that is rarely seen in this type of movie. And the supporting cast are also stellar, including a fantastic turn from the late great Dennis Farina as the mob boss who wants Duke dead. His delivery on every line is hilarious, as he tries to have his two idiot henchmen follow his orders. Joe Pantoliano also stars as a slimeball crook bondsman who sends out Walsh for the bounty, but sends out another bounty hunter, played by the brilliant John Ashton (‘Beverly Hills Cop’), pitting them against each other. And if that wasn’t enough fantastic talent, we also have the brilliant Yaphet Kotto as FBI agent Alonzo Mosely. Kotto is wonderful, especially in his scenes with De Niro. That’s why ‘Midnight Run’ works so beautifully, it’s the work of so many fantastic writers and actors, who make the movie far greater than almost anything in its genre. When it comes to action buddy comedies, there are two that stand above all else for me… ‘Bad Boys’ (And of course its sequel) and ‘Midnight Run’. And they were both written by the same man, the fantastic George Gallo. He may have only written the story for ‘Bad Boys’, and not the script, but I still praise him for both.

As ‘Midnight Run’ celebrates its 30th anniversary this year, it’s a perfect time for anyone who has never seen it to check out what is, in my opinion, easily one of the greatest movies ever made. Story, script, action and cast, all 100% perfection. And to top it off, a magnificent score by legendary film composer Danny Elfman. For me, the Tim Burton Batman movies, ‘The Nightmare Before Christmas’ and ‘Midnight Run’ are his greatest works. Check out the joyful main theme below, it’s the perfect theme for a perfect movie. Happy Birthday, ‘Midnight Run’!