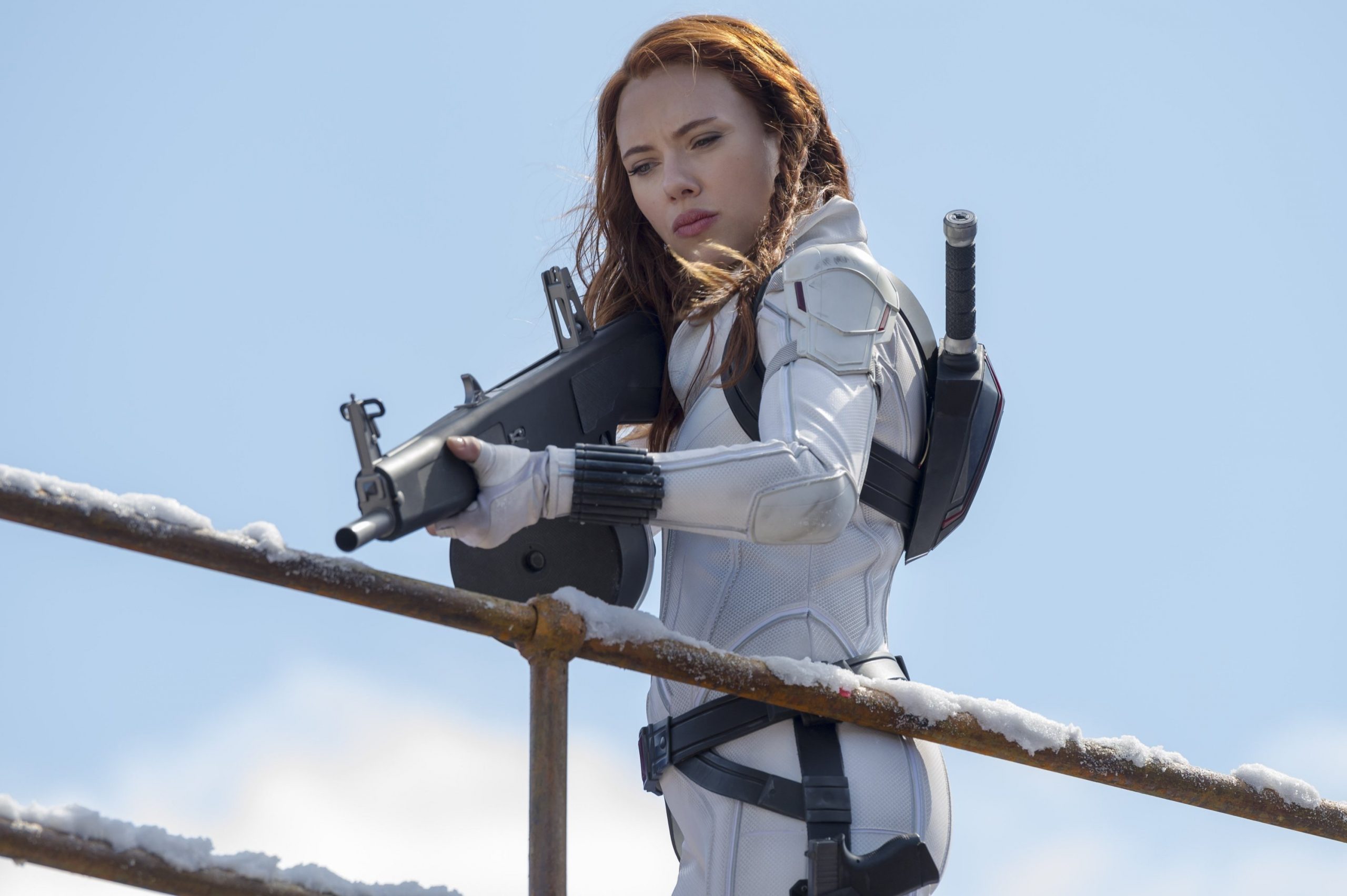 Though shuttered in due to the pandemic, the well-oiled machine that is the Marvel Cinematic Universe still continued afoot. For the past several months via the Disney Plus streaming platform, they’ve continued growing their universe via WandaVision, The Falcon & The Winter Soldier, and currently Loki. Now, they’ve made a big return to the big screen. You know that MCU fans have missed these films when the Marvel Studios’ familiar music and title play at the beginning and they start clapping and cheering right then and there, like a simultaneously “welcome back” and “sigh of relief” for the paradoxical sounding return of escapism. For now, we get what is both a proper feature film and send-off for the MCU’s first female super-hero: The Black Widow.

PLOT: As with most MCU blockbusters, the movie begins with a flashback, the setting for this one is suburban Ohio in 1995. A pair of deep-cover Russian spies posing as a married American couple escape to Cuba after stealing highly classified documents. In tow are two pre-adolescent girls who acted as their daughters as part of their cover. Upon arrival in Cuba, the two girls are rendered unconscious, separated, and sent for training. Fast-forward to 2016 to right after Captain America: Civil War, one of those girls is Natasha Romanoff (reprised by Scarlett Johansson), who’s been on the run and hiding after the Avengers’ split.

Meanwhile, her “sister” Yelena (played by Florence Pugh) is also a Black Widow and is on a mission to track down and eliminate renegade Black Widows (yes, plural). In the process of doing so, she is exposed to a chemical that frees her mind from her mission’s programming. However, many people do not want this anecdote exposed. To finish the job, the Taskmaster is set loose and goes after Natasha. The Taskmaster can mimic any physical action and proves to be a match for the Black Widow (or anyone, for that matter). It isn’t long before the two sisters reunite and begrudgingly team-up to put a stop to the man behind the Taskmaster and the Black Widows: Dreykov, a slimy Russian general portrayed by Ray Winstone.

The ladies’ team-up is a rocky one and forces them to get back in touch with their “parents”, Melina Vostokoff (Rachel Weisz) and Alexei Shostakov (played by David Harbour), the latter of whom was, during his prime, the Russian equivalent of Captain America before Dreykov decided to let him rot in prison. Though not at all happy to be around her “family”, Natasha agrees to this reunion to take down Dreykov in his sky headquarters and free the Widows. Her motivation is largely due to guilt from an incident involving Dreykov and his daughter, Antonia. An incident which led to her defection to S.H.I.E.L.D.

MY TAKE: If not for the pandemic, the film would’ve had better release timing last year. It should’ve had a release long before that, in fact. I say that because the Black Widow is the first fully established female character in the MCU whose presence warranted a big-screen film. And she (along with the Wanda Maximoff, and even Maria Hill) should’ve had her own movie before 2019’s Captain Marvel, which is largely considered the worst MCU film for good reasons.

The action is everywhere and terrific. Johansson does some aerial action that reminds me of a James Bond film. The fight scenes were well done and very gritty, more so than the average MCU movie, especially the ones between Natasha and Yelena. Their first encounter in 2016 was reminiscent of the final fight scene from The Accountant (2016). Florence Pugh is part of the comic relief as Yelena with her no-nonsense deadpan attitude. Though Natasha continues to maintain that they are not sisters, they argue and fight as such, with Yelena hilariously lampshading Natasha’s super-hero landing poses:

Rachel Weisz and David Harbour are good actors, the latter’s Red Guardian is the other comic relief, the big dull-witted strong guy trope like Drax the Destroyer. He laments that Captain America stole his thunder considering he, as the Red Guardian, was Russia’s first Super-Soldier, but doesn’t get nearly as much play. To bring up another movie reference, Rachel Weisz’s flashback scene in talking to her “daughter” about pain is a direct take from The Long Kiss Goodnight (1996). Lastly, yes, there is a post-credit scene, one that harks back to a certain Disney Plus series.

One of the factors that plague the film and keep it from being great are not only its reliance on nods to other films (the aforementioned ones and one scene has noticeable parallels to Captain America: The Winter Soldier), but too many long dialogue-heavy scenes. For example, there’s a scene where Natasha speaks on what happened in Budapest, but it would’ve been best to see it in a flashback. We need them to show it, not just simply tell it.

Much of the film’s hype in the year before its release was the knowledge of the Taskmaster being involved. The Taskmaster has a cool introductory scene and the character’s costume design is dope. However, the reveal of the character’s background was underwhelming and, if you know the character’s personal history in the source material, you might have seen it coming.

Also, given that most of the characters are Russian, I expected to see more of Russian culture. What I’ve found peculiar is Johansson’s Natasha never once slips into a Russian accent in the film. The film is certainly action-packed and the acting isn’t bad, but it’s definitely a little dark. The first 20 minutes of the movie isn’t suitable for most kids under a certain age. We see little girls getting separated from their parents, injected, sedated, and then experimented on. The plot’s stakes don’t seem that high, but I understand the social commentary. There’s also a comment about extracting female genitalia, but why was that even included after the backlash from Avengers: Age of Ultron (2015)? Overall, this wasn’t great, but a solid film nonetheless.