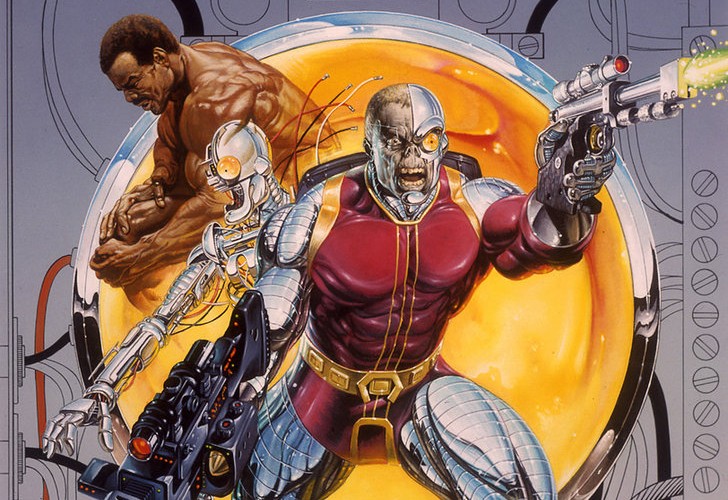 SHACK HOUSE: DEATHLOK AND THE GHOSTS IN THE MACHINE

I’ve been looking at the Marvel Comics cyborg character of Deathlok over the past year, researching the first incarnation all the way up to the one that appeared in the early 1990s. Using a concept in Greek mythology, I believe I can tie them together. But first, some character and chronological background is needed:

Deathlok I was Luther Manning, a United States Army Colonel from the reality of an alternate future (Earth- 7484). Fatally injured from the explosion of a concussion mine during a military war games exercise, he was transformed into a cyborg and had adventures in the future and later in the present due to various time travel incidents. First Appearance: Astonishing Tales #25, Aug. 1974 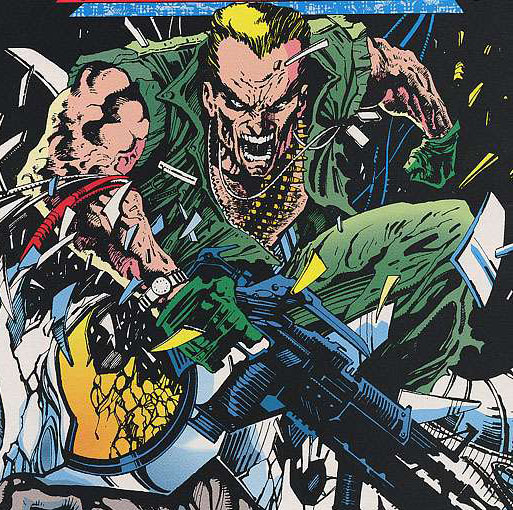 Technology from the original Deathlok found its way into the hands of the present-day Roxxon Oil Corporation. Similar to Cyberdyne Systems in Terminator 2: Judgement Day (1991), Roxxon created the first robotic duplicate and later advanced the technology through their subsidiary at Cybertek Systems. The purpose was to reverse-engineer a new cyborg Deathlok years earlier than in Manning’s timeline. Patriotic action-junkie, ex-NYPD, and former US Army Colonel John Kelly volunteered to be transformed into the first modern-era Deathlok. Kelly served briefly as Deathlok II until his brain was electrocuted by his on-board CPU when he tried to deviate from the CPU’s mission parameters. First Appearance: Marvel Comics Presents #62, 1990 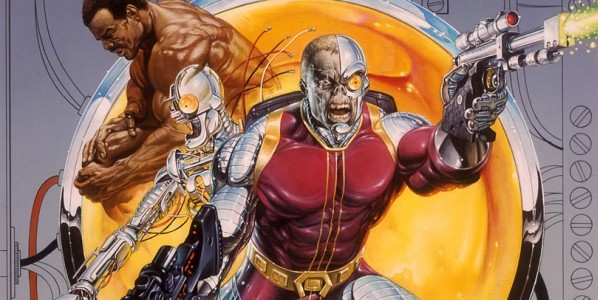 After John Kelly’s brain was destroyed, RoXXon used one of the Deathlok computer programmers, Michael Collins, as his unwitting replacement. Collins’ brain was encased into the Deathlok cyborg and was used for various missions. However, Collins’ mind eventually asserted itself when he used his programming skills to gain full control over the cyborg body and escaped. Collins operated as Deathlok III from that point on. A reluctant hero searching for his human body while coping with his new one, III later gained the ability to change back and forth from his human form and into Deathlok. First Appearance: Deathlok Limited Series #1, July 1990 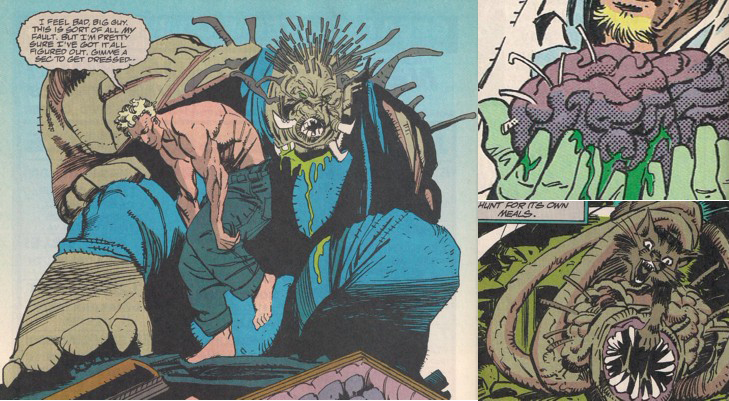 Biohazard is John Kelly’s electrocuted and discarded brain, mutated and gaining sentience via exposure to stasis fluid and nanotechs. It later began manifesting “self-mobilizing” and “organic assimilation” traits. Kelly’s brain, soon renamed “Biohazard”,  eventually developed self-awareness and began self-identifying as John Kelly, from the original memories left in its partially-repaired brain. Unfortunately, the severe damage originally inflicted to Kelly’s brain via electrocution combined with the absorption of various brains (and therefore their memories) left Biohazard confused and unsure of its own identity. Biohazard was left with an urge to consume anyone that led it closer to regaining John Kelly’s full memories. First Appearance: (BTS) Marvel Comics Presents #62 (1990); (brain) Deathlok (Vol. 1) #1 (May 1991); (As Biohazard) Deathlok (Vol. 2) #12 (June 1992).

Before John Kelly’s brain was electrocuted to death, a digital copy of his personality and memories (up to the point of his brain being destroyed) was stored on-file inside the Deathlok cyborg’s CPU. While mentally researching information on his predecessor, Collins accidentally activated Kelly’s personality as an independent artificial intelligence. When confronted by a group of Cyberwarriors, Deathlok III attempted to hack into one of the cyborgs to override its programming. Kelly’s personality program used this as an escape route and uploaded himself into the Cyberwarrior, becoming “Siege.” First Appearance: Deathlok (Vol. 2) #19, January 1993

It’s important to note that none of the aforementioned incarnations would exist if Deathlok had never traveled back in time to the present and had his cybernetic body studied and eventually reverse-engineered to create a new Deathlok by the present day RoXXon Oil Company via Cybertek.

What truly represents “us”? The body, the mind or the soul? In philosophy, there is a logical paradox called Theseus paradox, based on the ship of Theseus. Is an object which has had some or all of its parts replaced by fundamentally the same object? The question was posed by the Greek philosopher Plutarch during the first century.

Luther Manning was reported killed by a concussion mine. The scientists salvaged his severely damaged (but marginally functional) organic parts and merged them with a cyborg named Deathlok. This seemed like a whole new being at first, with Deathlok I responding to pre-set mission parameters by his masters. Eventually, Manning’s brain overrode the onboard CPU allowing him to gain full control of his new body. He maintained an internal cyberspace dialogue with the CPU, juxtaposing his human consciousness with the cold logic of the computer.

Some believe that is only the body that comprises human identity. If the Theseus paradox is applied only to a body that has undergone external changes over time, then Luther Manning is no more. But his human consciousness remains untouched, is aware of its situation and battles to regain the physical humanity he has lost.

When the present-day Roxxon created the first modern-day Deathlok out of John Kelly, they did so without taking the time or inclination to consider the ramifications of reverse engineering a technology they did not fully understand. Their lack of foresight essentially divided Kelly’s being to a trinity of sorts. But again, if only the body comprises a being’s identity, then John Kelly ceased to be once he was transformed into Deathlok II.

One counterargument to Theseus’ paradox is if you replace planks on one ship, and then use the old planks to create a new ship, which ship is the original? In this case, there’s a two-fold example:

a.) Kelly’s brain was removed from the cyborg and replaced with that of Michael Collins, who later took control of the cyborg and was known as Deathlok III. So, really, this version of Deathlok was Collins’ brain occupying and controlling John Kelly’s modified body. Incidentally, Deathlok’s organic portions are maintained by nanotech machines which operate through nutrients and instructions received from reading the DNA cells of the brain in the cyborg. Over time, the organic portion of Deathlok’s face began to resemble Collins’ instead of Kelly’s. The nanotechs were now taking instruction’s from DNA cells in Collins’ brain. In essence, Michael Collins’ brain and DNA began to write over what was once John Kelly’s body. And the fact that Collins can now shift from his human form to his Deathlok form at will lends further credence to John Kelly’s body now being something and someone else’s entirely. The original body has ceased to be.

b.) Kelly’s brain continued to exist as an independent sentient entity known as Biohazard, thanks to nanotech experiments performed on it after the CPU electrocuted him to death. Biohazard self-identified itself as John Kelly, and has access to some of his memories. The last thing Biohazard remembered as Kelly was bits and pieces of being Deathlok II. It sought out Deathlok III because it knew there was a complete copy of Kelly’s personality/memories locked in a file within Deathlok’s CPU. By consuming Collins, it could write over its set of damaged memories with the full computerized copy.

Biohazard’s search to complete its identity mirrors the counterargument: The brain, damage notwithstanding, became a whole new being than from where it was taken. In many ways, Biohazard embodies John Kelly’s identity more so than the Deathlok cyborg ever did.

While Biohazard was destroyed, the being called Siege is also John Kelly, the computerized preserved record of his personality and memories cast into a RoXXon Cyberwarrior body. But, even in control of a physical body, Siege has no sense of touch. While Siege may be “alive”, the fact that he no longer has this portion of sensory input implies that living things (with or without physical bodies) have their being grounded in the data provided by their senses. The senses are a big part of one’s identity. If one or all gets taken away, the mind becomes starved for some kind of stimulation to compensate for what the body has lost. Kelly was already an aggressive man, and putting him to a powerful aggressive body that can’t feel anything at all was maddening. In fact, he’s likened his current existence to as though he’s playing a video game.

But more than that, I believe the reason Siege can’t feel has nothing to do with the fact that the Cyberwarrior body is not his own natural body. But rather because the being controlling it is a digital clone of John Kelly’s mind. Collins’ theorized that it’s merely an artificial intelligence programmed to believe itself to be John Kelly. Either way, if Theseus paradox is applied, neither Siege nor the electronic version of Kelly count as the original.

Individually, the body, mind, and soul comprise mere facets of our identity. Together, they are greater than the sum totality of the parts. So, I do not believe a logical solution to Theseus’ paradox can be derived from observing ships or the splintering of one’s being. The only original genuine article is the being or object itself, sans alterations from external sources. But then again, is a person with a prosthetic leg that functions like the original leg he/she was born with still who they are? On the inside, yes. On the outside, yes and no. It’s all a matter of interpretation. As with most things, there is no complete and definitive answer.

All images courtesy of the Marvel Entertainment Group.