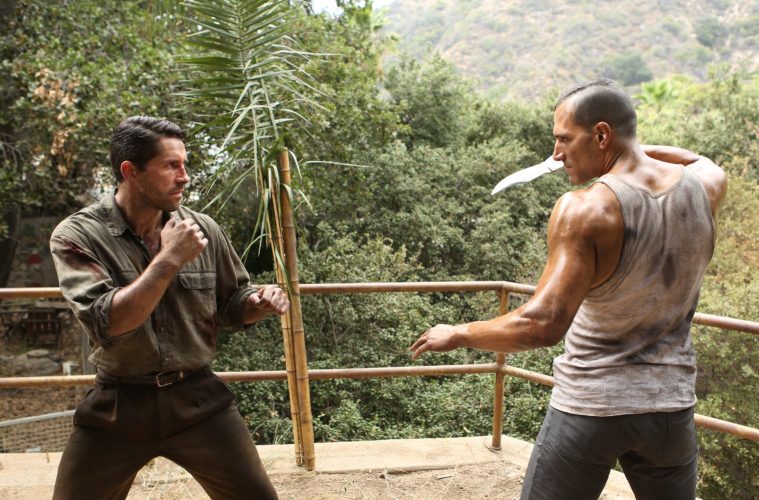 In recent years, Scott Adkins has carved out a well-deserved reputation as the king of B-movie beat ‘em ups. And his involvement in a film is generally a guarantee of quality for action movie fans. Sadly, his new release Savage Dog is more of a toothless mutt.

The film takes place in Indochina during the late Fifties, just after the French withdrawal. With a vacuum of government the country has become home to an eclectic mix of shady characters.

One of them is a former boxer played by our man Adkins. He’s wanted by British Intelligence for his involvement in Irish terrorism. The Boyka star is being forced to take part in illegal fight contests by a Nazi war criminal who is running a jail where Adkins is imprisoned.

After our kickboxing hero is released he tries to live his life peaceably working at a local bar. But he’s inevitably drawn back into the backstreet brawls. And when his friends are killed by the manipulative Steiner, Scotty Boy goes on a mission of revenge.While the set-up – punch-fighter meets kill ‘em all vengeance flick – is very familiar, Savage Dog does try to freshen up its formula.

The first act of the film is remarkably light on action as the film sets up its characters and the world the story is taking place in. This gives Adkins the opportunity to exercise some of his dramatic acting muscles and not just the ones with which he made his name.

Steiner’s past as an SS officer seemed to offer interesting story potential, but ultimately it has no bearing on the plot.

Worse, the early fight scenes are rather perfunctory in nature. Later ones are more elaborately staged, but they veer into rather puzzlingly graphic territory. And a verbose voiceover from Keith David (who plays a bar owner who becomes Adkins friend) that only seems to exist to cover narrative holes.

None of this is helped by Jesse Johnson’s slow motion addicted direction. It’s judiciously used during the fight scenes, but his only answer to a dramatic moment in the story is to slow the camera to a crawl.

By the end of the film it’s become so bad I started to wonder how much shorter the whole thing would’ve been were every scene to be run at normal speed. Having spent the bulk of his career as a stunt director, you suspect he doesn’t really know what to do with a camera or his actor during these moments.

All of which may make Savage Dog sound like a three-legged stray that should be put out of its misery, far from it.

Savage Dog is a perfectly serviceable if disposable piece of action. But given Adkins’ usual standards it’s a disappointment.

Savage Dog is available on demand and via streaming services.