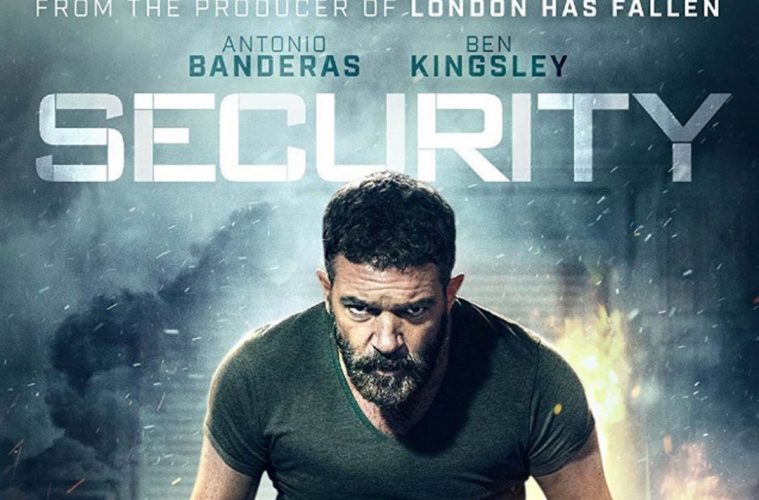 REVIEW: ANTONIO BANDERAS RETURNS TO THE ACTION GENRE IN SECURITY

If I asked you to name the biggest action stars of the last 25 years who would you say?

Yet, when you look at his CV the Spaniard has a seriously impressive roster of credits.

In Desperado and Once Upon A Time In Mexico he Robert Rodriguez helped revive a spaghetti western aesthetic to screen violence. With the two Zorro movies he proved himself the best swashbuckler since Errol Flynn hung up his tights and sword. And opposite Sylvester Stallone in Assassins he proved his good do scenery chomping villainy as well as anyone.

In recent years, Banderas’ actions outings have been more scarce, although he recently gave us a brief reminder of what he could do in The Expendables 3.

All of which makes the appearance of Security – which came out on DVD in July and is now available on Netflix – all the more welcome. This may be a low budget B-movie, but it does put Antonio’s charismatic presence back on centre stage.

He plays Eddie Deacon, an unemployed former solider. Desperate for work he takes a minimum wage job working the night shift at a shopping mall. It looks like a dull evening patrolling the deserted aisles. But when a young, panicked child starts banging on the doors events take a deadly turn.

It quickly transpires that the wee scamp is the key witness for a big gang trial. She’s being pursued by a team of elite mercenaries – led by Ben Kingsley – who are intent on killing her before she can give evidence.

Cut-off from the outside world, Banderas – along with a motley collection of security guards – find themselves amidst a fight for their lives as they try to save themselves and the girl. 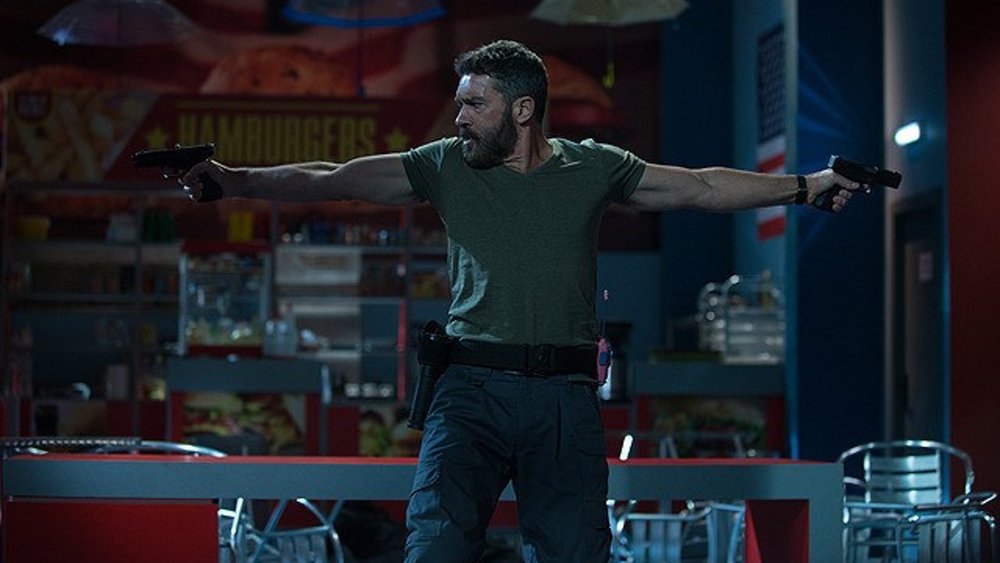 What we get over the next 90 minutes is basically Die Hard-in-a-mall with a side order of Home Alone. Armed only with batons and tasers, our heroes have to improvise weapons and traps contrived from the shopping centre’s stores as they try and keep the invaders at bay.

None of this is terribly original and the film’s low budget is evident throughout. But director Alain Desrochers keeps the story moving along briskly, and exploits the action possibilities of its premise.

Banderas’ star quality though is what elevates the film. Lest we forget the man is a fine dramatic actor who’s regularly worked with Pedro Almodovar and starred opposite Tom Hanks in the Oscar winning AIDs drama, Philadelphia. While the material here is hardly a stretch he grounds the film, and the pathos he brings to the character keeps you invested in the story.

He also gets to reprise some of his trademark Mariachi moves in the gun fights and close quarters combat as the action ratchets up towards the climax.

Security is a decent and entertaining action flick. But more importantly, it’s a reminder of what Antonio Banderas can do in the action genre. Excitingly, he’s already teamed up with Isaac Florentine for Acts Of Vengeance which is due out at the end of October. And now that Liam Neeson’s retired, let’s hope those scripts that would have been sent to him, head Antonio’s way.

Security is available on DVD and Netflix