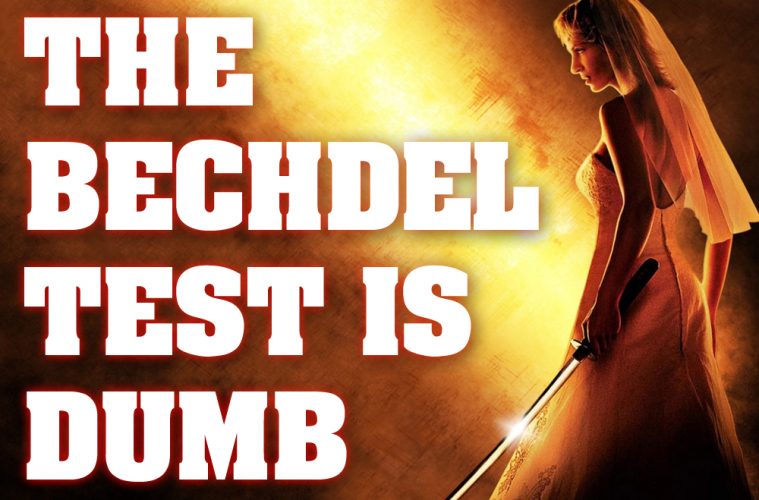 THOMPSONATOR CHRONICLES: @RKYLESMITH WAS RIGHT, THE BECHDEL TEST IS DUMB

So Kyle Smith, film critic for the National Review, got raked over the coals for saying this first, which is why I probably should just keep my mouth shut.

Except I don’t care. To hell with that. If upon seeing the video below you want to give me grief about it, come find me on Twitter @ActionRation. I look forward to our conversation.

I’m sorry (not sorry), but the Bechdel Test is dumb.

The test, which was first created in a comic book by Alison Bechdel almost 40 years ago as sort of a joke, is used by a vast majority of film critics to determine whether or not a movie is politically correct.

How do they determine that? Well, the movie in question most have two women, who have a conversation about something other than a man.

What’s sad is none of them seem to notice just how ‘problematic’ that ‘criteria’ is. By Bechdel’s standards, basically every lesbian skin flick with a smatterings attempt at plot (ha) would pass, while clearly pro-feminist films like ALIEN are up for debate. YES, even ALIEN.

The thing is film critics, intersectional feminists, and now statisticians in the employ of Nate Silver’s 538 know the test is incredibly flawed, which is why in the case of the latter they attempted to make it better by creating not just an updated one, but…. wait for it… 12 new tests that try to determine the same thing: Are women underrepresented in Hollywood?

Here’s the problem. None of these tests account for choices people make in real life. None of them, in the case of Nate Iron Ore’s crew, account for variances in demographics, which may determine who is likely to get hired (try telling the South Koreans their film market is racist because it lacks diversity).

And NONE of them prove that people in Hollywood are maliciously discriminating against women… or that the average woman actually gives a crap as Kyle Smith pointed out in his original piece.

To be honest, I don’t care about Alison Bechdel and her ‘rule.’ However, when mainstream critics and sites as high profile as 538 are using arbitrary criteria–try testing a 1000 action movies vs 1000 romantic comedies and comparing the results–to determine that Hollywood needs to become more politically correct than it already is, well, now I couldn’t just remain silent.