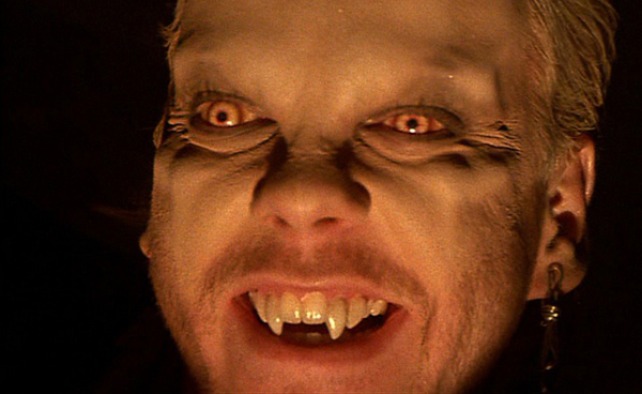 Before “Twilight” commercialized vampires and transformed them into wannabe Guitar Hero emo crybabies, vampires were actually cool. Even before “Buffy the Vampire Slayer”, vampires had already taken a modern goth motif. Before Kiefer Sutherland was Jack Bauer, he was a teenage vampire by the name of David in a 1987 film titled “The Lost Boys”. It was a modern vampire horror flick with elements of black humor and comedy thrown in. Also starring in the film were the two Coreys: Corey Feldman and the late Corey Haim, Jason Patric, and Jami Gertz. David’s an amoral vampire leading a like-minded gang of the same. Patric’s Michael is the new kid in town and the a recent “candidate”. Despite having been transformed into a vampire, he doesn’t share the gang’s bloodthirstiness.

Amid the backdrop of RUN-DMC’s crossover smash hit “Walk this Way”, David and his gang attack beachgoers partying around a bonfire. There’s blood, gore, burning, and David calling out to Michael to join them. Watching the scene from the very beginning, you just know that something ominous is about to go down. But Sutherland’s delivery of the excerpt line, “Initiation’s over, Michael. Time to join the club!” sealed the deal for certain. As classic as that line is, I’m surprised Congressional Republicans haven’t tried to incorporate into speeches and fall completely flat like they did with Ben Affleck’s “The Town”.