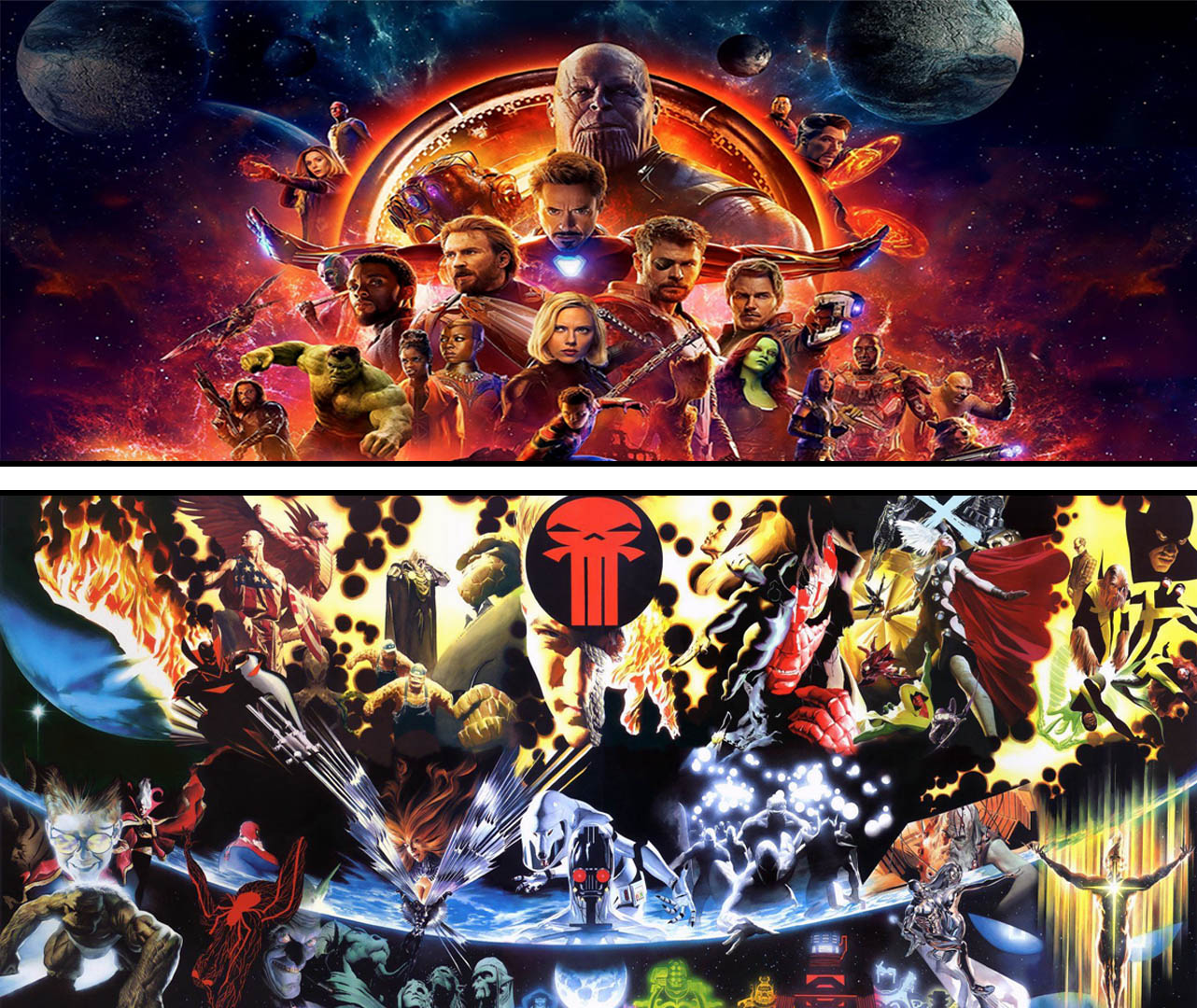 When I saw Captain America: The Winter Soldier (2014) all the way to the customary Marvel post-credit scene, I concluded that not only was the film one of Marvel Studios’ best releases, but also the one with the most balls. It took balls to dismantle S.H.I.E.L.D. and add an interesting dimension to the title character’s on-screen interpretation. It also validated the Russo brothers (Anthony and Joe) as legit directors, so much so that Kevin Feige entrusted them to future Marvel projects: 2016’s Captain America: Civil War and the most recent blockbuster smash, Avengers: Infinity War. The ensemble cast of the latter is the primary attention grabber, because nearly every main character to have ever appeared in a Marvel Cinematic Universe film was included in the 3rd film of Marvel’s Avengers franchise. While the film now stands as the highest grossing super-hero film of all time and has been critically lauded, the ending spelled out one word to me: “Deconstruct”.

Within Marvel Comics’ book continuity, the events taking place in the Marvel Cinematic Universe are in a parallel universe. Framing it in a parallel universe allows creative teams to explore the characters in ways that they can’t within the normal flow of events. Multi-tasked with both paying homage to and examining the characters, this often leads to finding out what makes them tick by breaking them apart. In essence, by deconstructing them. The now-often parodied ending of Avengers: Infinity War harked back to a song by hip-hop artist Nas titled “Destroy & Rebuild”, in which the rapper addressed his beef with others using the idea of destroying the old and rebuilding something new. Almost 20 years before the release of that film, Marvel had already decided to explore the nature of their convoluted universe and the characters who inhabit it. Set in a parallel Earth where every human now has superhuman powers, the need for super-heroes (and villains) became obsolete. Conceptually created by famous painter Alex Ross and writer Jim Krueger (with John Paul Leon doing the inserts), the 14-issue miniseries was released in 1999 and was called Earth X. Often called Marvel’s version of the 1996 DC miniseries Kingdom Come (which also included Ross), Earth X deconstructed Marvel’s main heroes, villains, and the mythos of its universe via alternate older future versions of those characters.

Even though both Earth X and Avengers: Infinity War share similarities in their deconstructive themes, they go beyond that in other ways: Both are love-letters to the Silver Age and both are bringing their characters to a logical conclusion given the dystopian settings. The similarities even extend to the surnames of their creative teams: “Ross” and “Russo” are practically homonyms to one another. There are also parallels to some of the MCU characters with their Earth X counterparts. Even the villains get picked apart too. 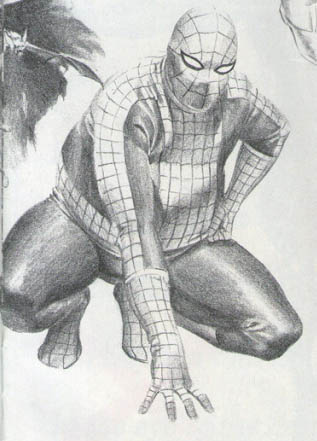 The MCU Spider-Man is a teenager. He’s hyperactive, hormonal, sassy, but is generally eager to use his abilities for good. His Uncle Ben’s hollowed words of “With great power comes great responsibility” is what drives him. In Earth X, he’s a middle-aged man with a sagging beer gut who no longer felt any sense of responsibility in terms of super-heroing. And why should he when everyone has super-powers and the world knows his identity as Peter Parker? He has a daughter named May who inherited his spider-powers, but what it takes is a threat to Earth to jolt him back into action. It was quite a hilarious sight in seeing Peter steal a Spider-Man costume from a dime store and literally swing back into action. Even that reality’s version of Captain America jokingly lampshaded their roles during the conflict with the Celestials (“Peter? Peter Parker? I thought you gave up being Spider-Man. From the looks of you, you should have”). 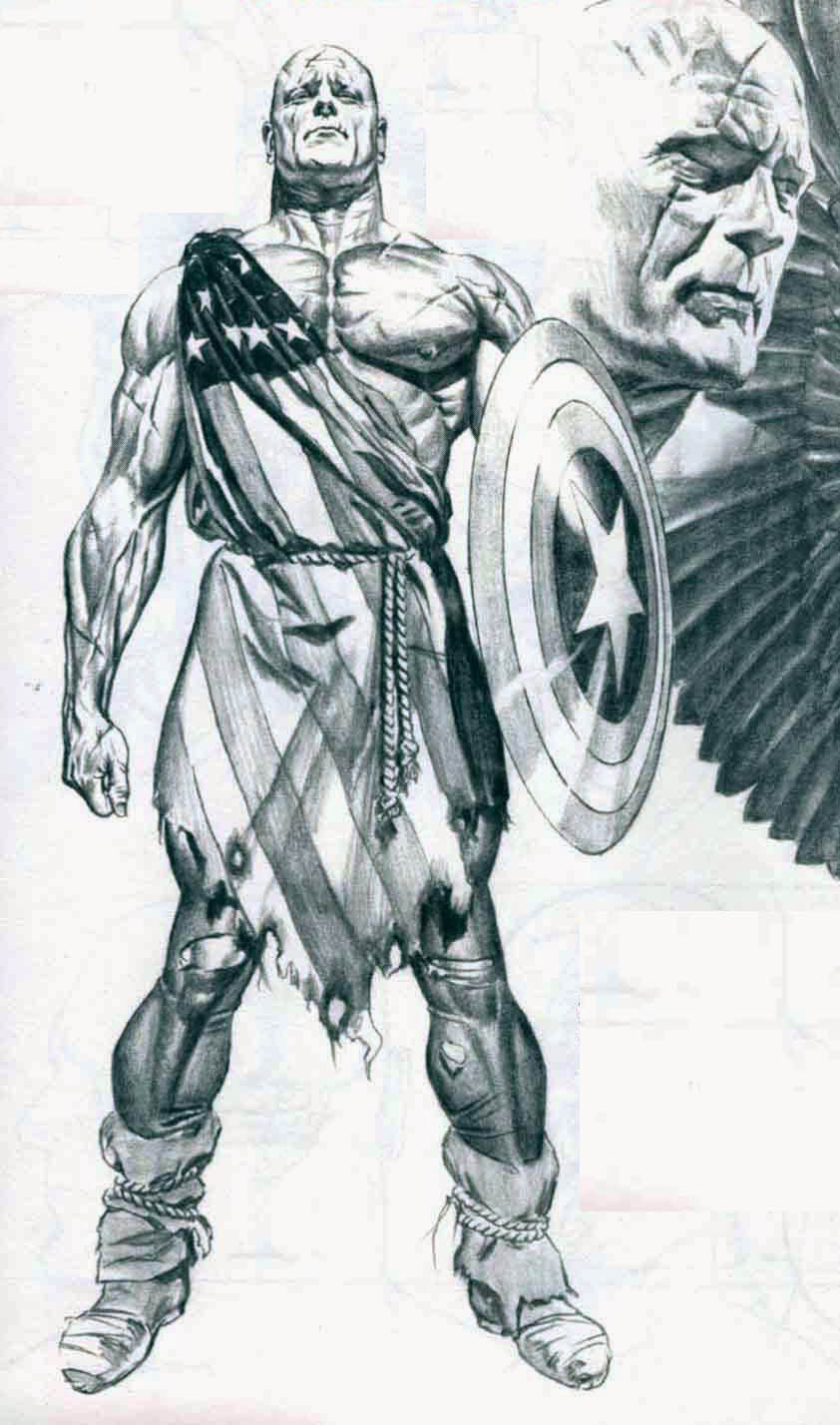 Steve Rogers of Earth X is over 100 years old and remained untouched by the plague which granted human beings super-powers. The Super-Soldier formula which transformed him into the peak of human physical perfection not only kept him fit well past his centennial, but also prevented him from being mutated with powers. Like his MCU counterpart, he is in a world that passed him by. He remains the same, but the world he once knew is gone. Both Captain Americas are men out of time, draping themselves in American symbol for nostalgia and comfort. The Earth X Cap is noticeably older and no longer wears a mask. The letter ‘A’ appears to have been carved on his face somehow. The MCU Captain America in AIW has grown a beard, symbolizing his growth as a character and leader. 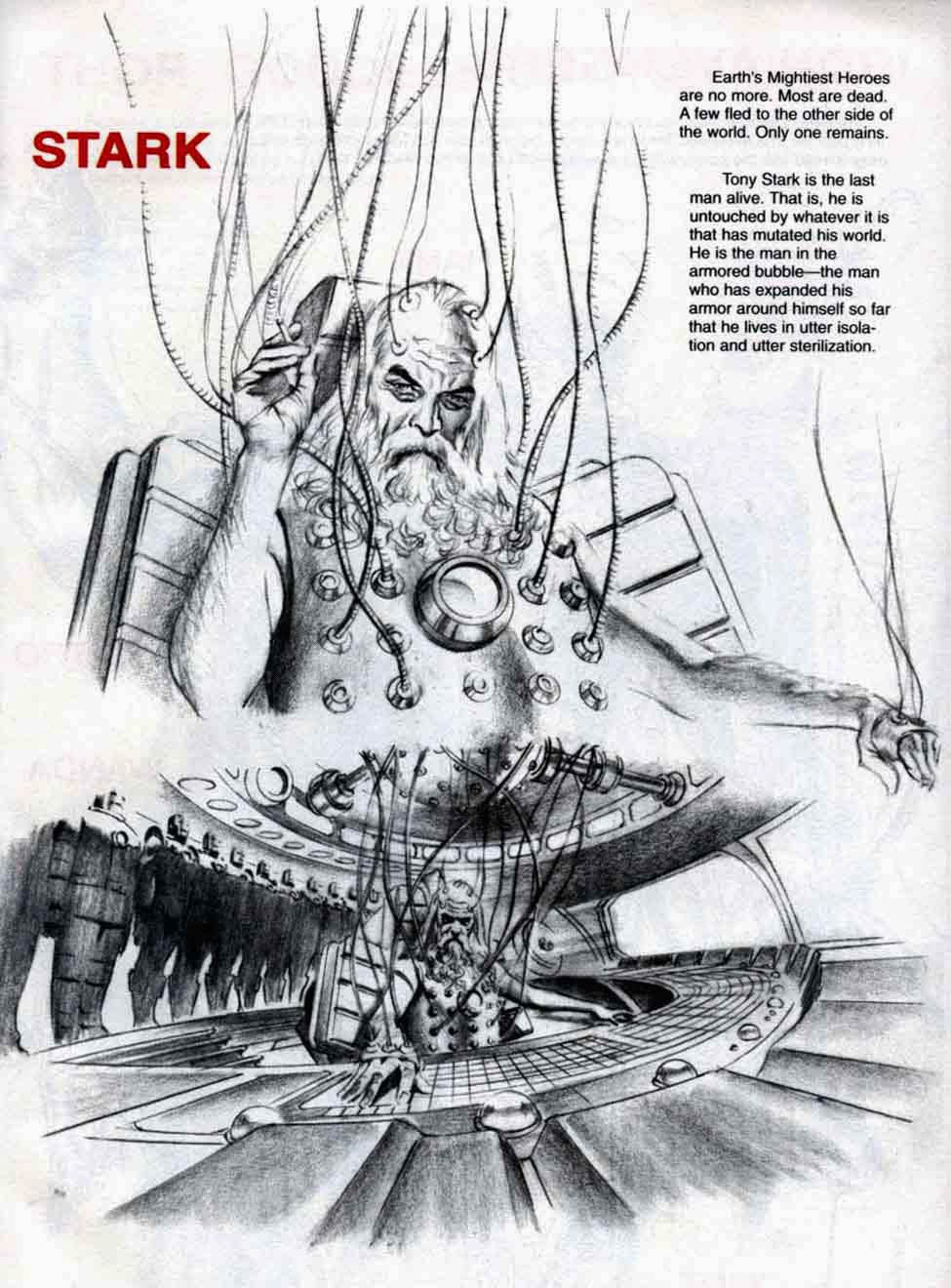 The MCU’s Tony Stark may be an irritating genius wit (although Dr. Strange most certainly gives him a run for his money) who also doubles as a lovable asshole, but the one thing you can’t call him is a coward. He revealed himself as Ironman to the world and even dared his enemies on national television to come attack him at his home, going so far as to give them his exact address too. Earth X puts Stark in a whole new context. It posits that his pathology is one of hiding: Behind his Ironman armors, behind his alcoholism. When the mutating plague was released, Stark locked himself inside of his home and sterilized his environment, only maintaining communication with the outside world via video. On a superficial level, Stark’s move seems cowardly: Maintaining his own humanity through self-isolation. But it turned out to be a calculated move: Stark was still a genius inventor who went to an extreme length to preserve his humanity in order to restore that of his fellow man. Norman Osborn is the POTUS in Earth X and Stark had been doing business with him. Osborn granted Stark political asylum (a home) in exchange for helping to solve the country’s hunger problem. Stark also constructed a force of robotic police called the Iron Avengers to be used in Osborn’s employ. Secretly, though, Stark was planning to use the IA to overthrow Osborn. Also, his home was actually another suit of armor, a modified version of the Red Ronin’s armor. When the Celestials arrived on Earth to wipe it out, Stark makes the ultimate sacrifice against them to preserve it (“Leave it to the billionaire to buy the world some time“). 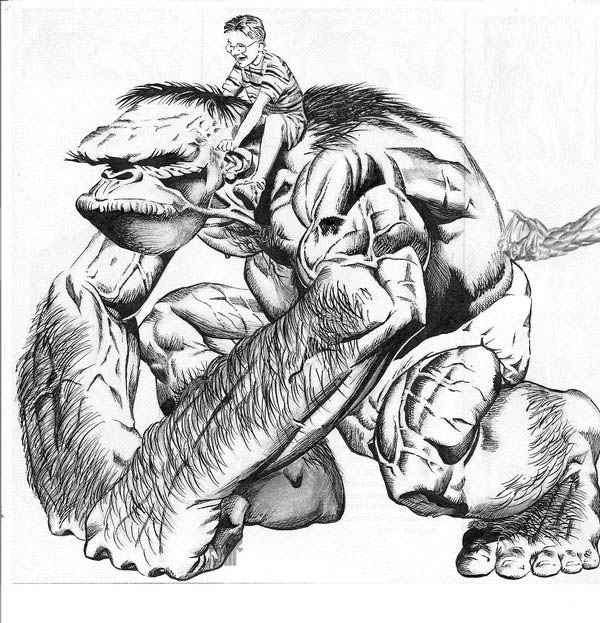 Next up is Bruce Banner. In AIW, he only transformed into the Hulk once. Whenever he was attempting to release the Hulk, the green monster resisted and let out a comical “Noooo!“. The Hulk will most certain return in the AIW sequel, but his resistance to Banner is most intriguing. Now, Bruce Banner is a mentally ill individual and that disorder led to the Hulk persona. Also, the fact that he was reduced to comic relief in the film parallels his Earth X counterpart. Bruce Banner was affected by the mutating plague and it reduced him in many ways. The plague separated Banner and his Hulk persona into two separate entities. The Hulk is now a mindless behemoth in a diaper, but under Bruce’s control. And Bruce Banner? Because the Hulk’s anger stemmed from Banner’s childhood abuse, that’s exactly what Banner was physically reduced to: A child. Bruce is now well-adjusted adult with a child’s body, with all of his anger given in the form of the Hulk. However, Bruce has full control over the Hulk’s actions, but his sight is limited to seeing only through the Hulk’s eyes. 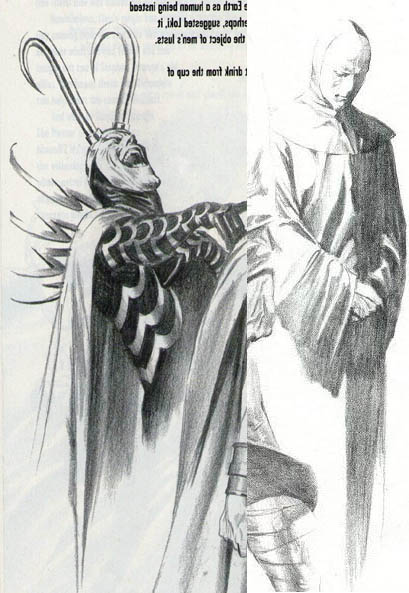 The villains gained a level of evolution in Earth X. In the MCU, Loki is the trickster god of Asgard, causing mischief there and on Earth largely because it’s in his nature. In Earth X, Asgard’s deconstruction began with him. As the story progressed, it was revealed to him that he and the Asgardians are not actually gods, but aliens with a mutation that makes them malleable by belief. When they arrived on Earth centuries ago in Europe, the Nordic people who they were greeted by perceived them as the gods from Norse mythology and that’s what they became. As Loki is literally a natural liar, he was the only one able to grasp the possibility that his entire existence was a fabrication. Realizing that is what gave him real freedom of choice and gave him the ability to be whatever he wanted for himself. No longer molded by the imagination of others, Loki spearheaded the fall of Asgard after convincing Thor about the truth of their existence. Now, the Mad Titan known as Thanos is more sympathetic in AIW. He’s out to destroy the universe and become its god, but there’s more to it than that. In the comics, he has an infatuation with the personification of Death and wants to send all the souls in the universe to Mistress Death to make her happy. Within Earth X, he is still in love with his Mistress even after his own death. In the Earth X sequels (Universe X and Paradise X), he learns of his true origins and actually eradicates Death itself. In the MCU, he wants to kill everyone (although not without some remorse). In Earth X, he made death no longer possible.

Some of the parts in AIW were questionable as to their intent. For example, they had all of the incurable wise-asses in the same scene (Stark, Strange, Spidey, and the legendary Star-Lord) and all of the Black characters (Black Panther, the Falcon, and War Machine) were in the Wakanda battle scene. However, none of those match the analogs within Earth X. Though intent is questionable with the character analyses above, both Earth X and Avengers: Infinity War are comparable in ways that inextricably link them together.