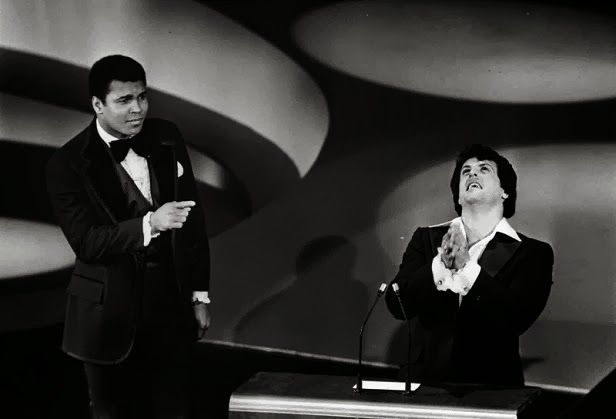 On June 3rd, the world lost one of its greatest athletes. Muhammad Ali, legendary boxer and American icon passed away at the age of 74.

I’m not even going to try and sum up what he meant and what his legacy meant to the glove game, the world of athletics, showmanship, political activism, and entertainment at large. What I am going to do is remind you of a time when boxing was the greatest sport in America. A time when the greatest fighter in that sport called out the actor who made the greatest boxing movie ever.  Of course that fighter was Ali (he was never shy about telling you that). Of course that movie was Sylvester Stallone’s Rocky.

The venue is the 1977 Oscars, and while Stallone is doing the honors of announcing the winner for best supporting actress, Ali comes out of nowhere and helps create one of the best Oscar moments ever. It’s a fantastic little scene, and a unique moment when two of the greatest in their respective fields actually got to meet.