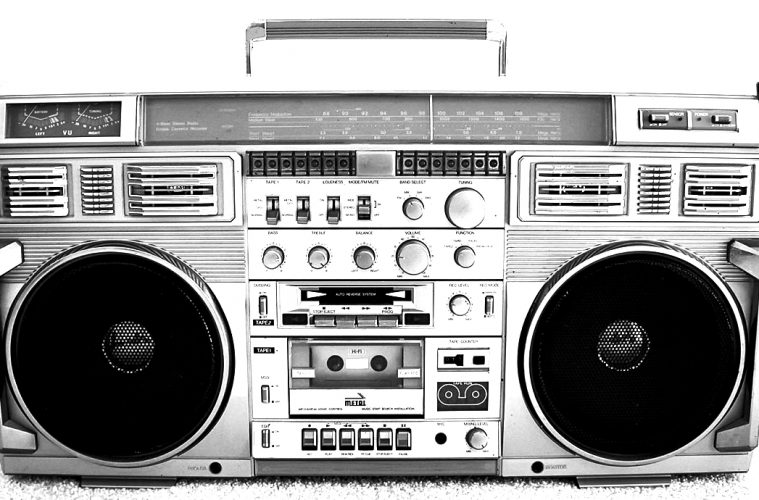 As you know, Action A Go Go brings you everything, from action movies and TV shows, to video games and comics. But we also bring you awesome music to brighten your week. So I thought it was about time that I jumped into it again, to present to you some of the finest music out there. The last time I presented a music article, I gathered together the best of the most epic movie songs, and that was fun to do. This time, I hope to put forward a list of music fit to blow the hair from your body. And hopefully, if you enjoy this list, I will aim to serve up a playlist of the most awesome music around, every week.

This week, I’m sticking to the greatest in metal and rock, with 10 spectacular tunes set to blow your mind. Ranging from classic 80’s radio rock to the demon geniuses of heavy metal, this list is sure to have your brain spinning. Wth a mixture of movie tracks and anthems fit for the big screen (We are movie lovers, after all!), I hope you enjoy our first BOOMBOX! playlist. 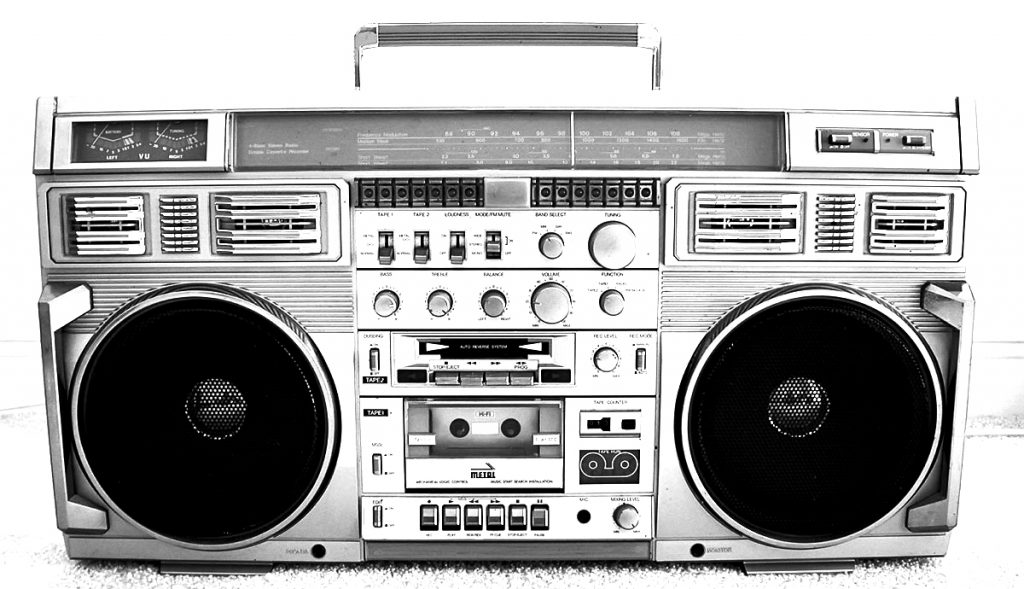 I start with the most epic rock song ever created. The mighty British metal band Judas Priest have remained the greatest in the genre for their entire career. For both the incredible vocal power from legendary frontman Rob Halford, and the spectacular band who smash drums and destroy guitars with their music alone, they are the simply the greatest heavy metal of all time. And here, the masterpiece of their career, in my opinion. An 8 minute wonder that sounds like it’s just burst from the end credits of a major action blockbuster , Blood Red Skies features a second half that makes us relive the glory of Rocky Balboa, as he fights his way to become World Heavyweight Champ, and gives us visions of the Autobots destroying the Decepticons in a Transformers movie. It’s the stuff of dreams, that incredible piece of music with Halford’s epic voice chanting words like “As the sky fall down!”, there’s nothing like it in rock music. Many people have their own favorite Juad Priest song, but for me, they’ve never put forward anything that could match the pure power and excitement that Blood Red Skies delivers. The first half is a joy, but that second half will have me praying to the Priest forever. Turn your volume up full for this.

I came to discover this band and this song from a music video tribute to my favorite TV show ’24’ that had been created by a YouTube user some years ago. The video has since been taken down, but not before this song took its hold on me. As the band are called Epica, the song itself couldn’t be anything but epic. Exhausting, powerful, hugely exciting, it fitted the action of ’24’ perfectly. It’s neverending surge of guitar and orchestra, with the lead singers, both male and female, bringing such power to its words, the whole thing is glorious. And that middle section is pure genius. I grew fond of Epica, but have never found anything remotely this fantastic in their catalogue of music, it stands easily as their finest work of art.

As movie fans, I’m sure we’ve all come to absolutely adore this piece of music. Globus are a stunning band, worthy of their great acclaim. But Preliator is so far beyond anything they’d ever created before, or after. Well known for its inclusion upon many movie trailers (I always loved it on the trailers for Sam Raimi’s ‘Spider-man 2’), it’s one of the greatest tunes ever created. That powerful instrumentation along with those powerful vocals from the countless singers involved, this is one of the most spectacular things you will ever hear. I adore every single second of it, it’s truly magnifcent.

Nightwish – End Of All Hope

I have many favorite bands, of many genres, and Nightwish have been high on that list for a long long time. Perhaps best known for their classic Wishmaster, this is one of their songs that made me the fan I am today. Inspired by the disaster movie genre, End Of All Hope is a surging masterpiece, marrying together rock and orchestra, very much the same as Globus above. With the original singer, Tarja Turunen, having left and been replaced, Nightwish don’t quite deliver the magic they used to. But this song showcases them at their very best, and stands as one of their best classics, if not their best.

Anyone lover of heavy metal music and horror B-movies knows and loves Rob Zombie. Famous for his solo career, along with that of his group White Zombie, and for his horribly underrated ‘Halloween’ reboots, Rob Zombie is one of the most importan people in both industries. Perhaps best known to movie fans for the inclusion of his music in many movies (My love of him was born from Arnold Scchwarzenegger’s wonderful ‘End Of Days’ in 1999, for which Zombie provided the awesome ‘Superbeast’), here is one of Zombie’s classics given an awesome makeover for the soundtrack to ‘The Matrix’ (1999). The original version of Dragula is awesome, but this Matrix version is kick ass, and definitely one of Rob Zombie’s best tracks.

What do you get when you mix Jimmy Page of Led Zeppelin with Tom Morello of Audioslave and Rage Against The Machine?… AWESOMENESS! Puff Daddy’s anthem, Come With Me, created for the wonderful ‘Godzilla 98’ (Roland Emmerich) has long since remained one of my top 5 favorite movie songs. Not just for its iconic Led Zeppelin riff from Kashmir, but for Jimmy Page once again belting out that wonderful masterpiece, alongside the greatest hip hop artist of his generation, Puffy Daddy. Daddy spitting awesome words of hatred, alongside Jimmy Page, with Godzilla eating helicopters, is too much awesome for one man to take. But sticking in Tom Morello to do a spectacular remix is total overload. Although not my preferred version of Come With Me (I will always hold the original movie version in my heart, alongside the movie itself), this remix is nothing short of bad ass. Enjoy it, while imagining whooping the ass of every enemy you have!

Swedish rock Gods Sabaton have delighted fans for well over a decade now, with their furious lead singer, their messages of anger against the world’s politics and wars, and once again the orchestral sound they pepper their music with, as Nightwish and Globus do. Although they do some fun cover versions of classics, such as a great cover of Rammstein’s Freuer Frei!, it’s music like this where they shine. A controversial song, Rise Of Evil tells the story of the beginning of World War II from a Nazi point of view, as Hitler and his evil army rise and begin to take innocent life, using the name of Germany to do their ill will upon the world. The marching gutiars and drums, with those powerful words and that fantastic choral in the back, make this song of the best metal anthems you’ll ever hear. That riff beginning 1 minute in is impossible not to adore. Go listen to more Sabaton, if you’re unlucky enough not to know of them already.

Iron Maiden – Hallowed Be Thy Name

Iron Maiden are possibly the most beloved heavy metal band in the world. They definitely crack my top 5 bands. And for all the classic hits they’ve had, I’ve never a song by them anywhere as much as I love Hallowed Be Thy Name. The thundering guitar, those drums, that voice from Bruce Dickinson, there’s nothing else like this in Maiden’s catalogue. The finale is especially incredible, it’s some of the best musician work I’ve ever heard in the history of rock music. To anyone who loves rock and heavy metal music as much as I do, this song, and Iron Maiden, mean the absolute world. Totally beautiful.

Journey – Edge Of The Blade

As we come to the end of this epic playlist, I have kept my favorite band of all time for last. Journey, through the majority of their line-ups, and their countless albums, have always rocked my world. Perhaps best known for their classic Don’t Stop Believin’, Journey have captured the hearts of the music-loving world for decades, with their radio-friendly rock, their dabbles into various genres such as blues and pop, and the legendary voice of the one and only Steve Perry. I am not just a fan, I am a worshipper. For all the pleasant, awesome, unthreatning music they’ve always been loved for, for me this song, Edge Of The Blade, provides not only a completely different view of the band, but also a harder edge to their musical skills that they rarely tapped into. Tying with their 1996 track Message Of Love for number 1 spot in my mind, Edge Of The Blade showcases the clean-cut and radio-friendly rock group as a force to be reckoned with in the heavier world of rock, with the dark lyrics and desperate urgency of this song. Not one of their known songs to the mass public, and not released as a single, this is a song crying out for attention. And boy does it deserve it. Journey will always be my favorite band, and this song is the reason they deserve that spot. Neal Schon is a guitar God, the greatest in the world, and he proves it here.

I hope you’ve enjoyed this list, and even discovered a few songs you may not have known before. Come back again and we’ll continue to blow you away with our Action A Go Go BOOMBOX!